A look at some of BTS' biggest fashion moments 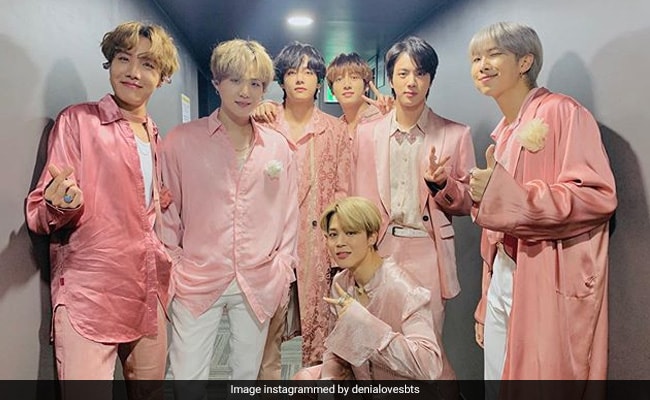 As Rohit Khilnani's exclusive interview with K-pop sensation BTS aired on NDTV, we have curated a list of another aspect (besides music) of the seven-member band that the fans absolutely love - their sartorial choices. BTS, which counts RM, Jin, Suga, J-Hope, Jimin, V and Jungkook, among its members, was formed in 2013. BTS has offered some major fashion icons and inspiration in the last few years - be it embracing gender fluid fashion or promoting local designers of their region, or even breaking the unspoken red carpet rules. Here's a list of the major fashion trends started by BTS.

When there is a mention of gender fluid fashion and musicians embracing it, one is likely to imagine pop stars with kohl-rimmed eyes and maybe septum piercings. However, BTS is one band that redefined gender fluid fashion all together. From pulling off pinks with utmost ease to, wearing chokers, they have done it all at some point. They have managed to make their sartorial choices synonymous with androgynous fashion, what with ruffled collars, high heeled boots (often sported by Jin). Our favourite has to be that beaded drop earring that V wears with all his pride.

We 'Bow' To Their Formal Style

BTS' staple might be high street fashion but they do clean up well. The K-pop band surely knows how to suit up if the occasion demands. The biggest example are the Grammy Awards. For the 2019 ceremony, the stars were men in black what with coordinated suits and tuxedos, designed by South Korean designers Kim Seo Ryong and JayBaek Couture. For the 2020 Grammys, the BTS surprised in overcoats, with a colour palette featuring shades of brown, camel, tan and black.

A Mix Of High-End And Homegrown

These K-pop stars can do it all. They might routinely wear Dior, Givenchy, Berluti, Saint Laurent, Gucci, Bottega Veneta but they never forget their roots. For the 2019 Grammys, they wore outfits designed by Kim Seo Ryong and JayBaek Couture - both Korean brands.

This seven-member boy band can swap prints, pinks and pastels in the blink of an eye. At the 2018 Billboard Music Awards, BTS made a head-turning appearance in seven distinct outfits by Gucci. It was raining prints and colors on the red carpet. They ditched the red carpet staples for graphic tees, Hawaiian shirts, loafers, bright colours and stripes. Their vibrant fashion choices in their music videos clearly needs no introduction.

Did You 'Hair' About All Shades Of BTS?

The band which was formed in 2013, has undergone many changes and their collective hair evolution is a different tale altogether. From RM' mowhawk to Jungkook's cherry red, to Suga's mint tresses, BTS has had some iconic hair styles over the years. How can we forget J-Hope's red bangs and Jimin's purple-pink hair? That's not it, there were also shades of orange, blonde, honey-golden, teal, platinum blonde, dual-tones and what not.

Accessorise All The Way

There's no stopping for BTS members when it comes to accessories. They love caps, beanies and are often spotted wearing them during tours. Drop earrings, lockets, studs and chokers are also some of the pieces that they add to their oh-so-fabulous outfits. Glasses and (now) masks are also important aspects of their outfits.

This K-pop band swears by denims, especially when it comes to airport looks. While clicked at the airport, they are often spotted carrying totes in neutral shades. They usually keep their airport looks casual and comfortable. Some of their airport staples include printed tees, jeans (of course), trenches, glasses and oversized shirts.

The exclusive interview with BTS aired on Friday October 30.

What do you think of BTS' fashion choices? Let us know using the comments section below.