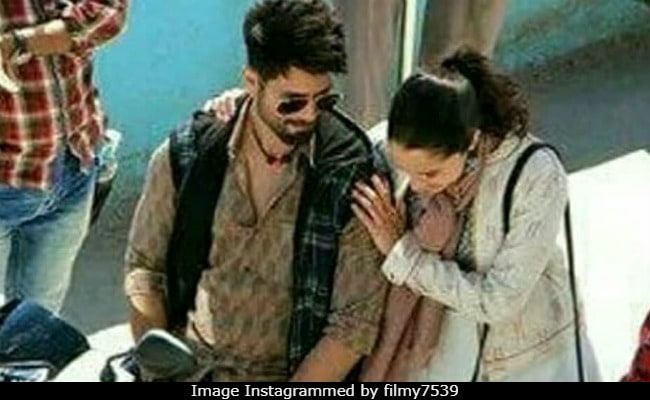 New Delhi: If you're looking for Batti Gul Meter Chalu co-stars Shahid Kapoor and Shraddha Kapoor, you have to drop down in Tehri, Uttarakhand. Yes, that's where Shahid and Shraddha are currently filming the Shree Narayan Singh-directed movie. Photos of Shahid and Shraddha from the shooting location - local by-lanes of Tehri - have been shared on social media in plenty. In the viral pictures, Shraddha can be seen riding pillion while Shahid rides a bike. Dressed in a printed kurta and jacket, Shahid looks like just one of the locals while Shraddha appears simply dressed in white winter wear. Batti Gul Meter Chalu reportedly casts Shahid Kapoor as a lawyer.

Here's how Shahid took Shraddha on a bike ride.

It appears, Shahid Kapoor did acquire a bike on his first day on Batti Gul Meter Chalu sets. Here's what he posted in February.

Meanwhile, Shraddha Kapoor has also been filling up her Instagram diary with plenty of posts from Tehri. She plays the role of "Lalita Nautiyal. Called with love - Nauti."

Ahead of the new set of pictures, we got a glimpse of Shahid's look from the movie when trade analyst Taran Adarsh shared this with us:

Batti Gul Meter Chalu also stars Yami Gautam, who is also said to be a lawyer in the film, and marks Shahid's second collaboration with Shraddha after Haider. Of casting Shahid in the movie, the director told PTI: "With films like Kaminey, Jab We Met, Haider and Udta Punjab, Shahid Kapoor has definitely proved his mettle as an actor. Having said that, his star presence is undeniable and I look forward to working with him."

Batti Gul Meter Chalu deals with the issue of power shortage in the rural parts of India and the discrepancies in electricity bills. The film is expected to hit screens this year in August.
Comments
batti gul meter chalushahid shraddha