For Amitabh Bachchan, It's All About Family. See His Post On The Bachchans 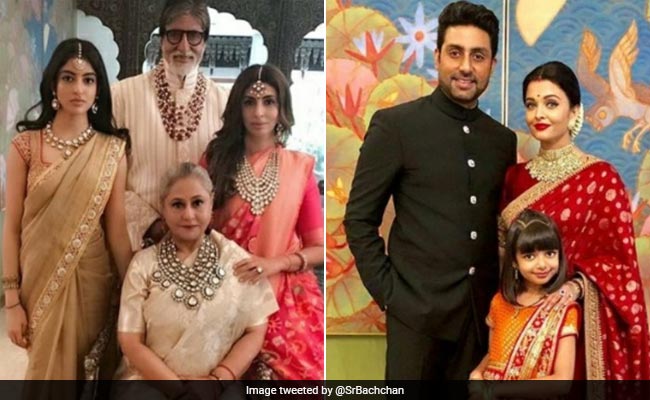 Amitabh Bachchan shared a set of family photographs from Isha Ambani and Anand Piramal's big fat Indian wedding, which took place at the Ambani residence in Mumbai on Wednesday. One of the pictures shared by Amitabh Bachchan is a collage. Big B juxtaposed a picture of himself with wife Jaya, daughter Shweta Bachchan Nanda and granddaughter Navya Naveli Nanda with a photo of Abhishek, Aishwarya and Aaradhya posing for the camera. The pictures were taken before The Bachchans left for the wedding. The other picture features Amitabh Bachchan with Jaya Bachchan and Navya Naveli. Big B accompanied the post with a million dollar caption, which perfectly encapsulates the essence of family bond. "Family togetherness is the bond that defies all else. Not that there ever is an else but if there were, it would never stand the test of a family standing together," Amitabh Bachachan wrote. He also shared the same pictures on his Instagram timeline but with a different caption. "Off to the wedding and we all are aware which one," Big B wrote.

T 3024 - Family togetherness is the bond that defies all else .. not that there ever is an else .. but if there were .. it would never stand the test of a family standing together pic.twitter.com/fPmjB38Zvk

Off to the wedding .. and all are aware which one ..

Amitabh Bachchan was one of the first ones to arrive with Jaya Bachchan, Shweta and Navya Naveli at Isha Ambani and Anand Piramal's wedding. Almost an hour later, Abhishek Bachchan, Aishwarya and Aaradhya were photographed entering the wedding venue. For the wedding, Jaya Bachchan, Shweta and Navya were traditionally dressed. Aishwarya Rai Bachchan looked stunning in a red saree from the collections of Sabyasachi. Abhishek Bachchan complemented Aishwarya in a black bandhgala and pants. Aaradhya looked cute as button in an orange and red lehenga.