"The way we part shows how strong our relationship was," wrote Saumya 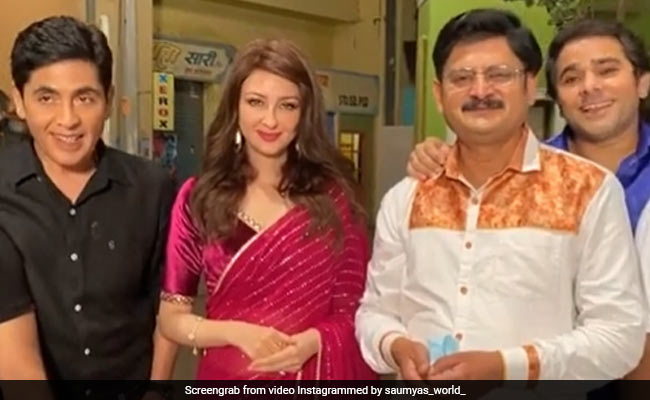 A still from the clip that Saumya Tandon shared. (Image courtesy: saumyas_world_)

Television actress Saumya Tandon shared glimpses of her last day on the sets of comedy show Bhabi Ji Ghar Par Hai.The actress has quit the show after being a part of it for five years. Sharing videos from the sets of the show, Saumya wrote: "End of a beautiful journey. The way we part shows how strong our relationship was. These are some moments to cherish all my life, my small note for every single person on the unit." The videos feature her co-stars Aasif Sheikh, Rohitash Gaud, Vaibhav Mathur and Deepesh Bhan singing a song for her. In one of the clips, Saumya can be seen getting emotional while thanking Aasif Sheikh for being a wonderful co-actor. The video also features other co-stars sharing their memories of shooting with the actress.

End of a beautiful journey. The way we part shows how strong our relationship was. These are some moments to cherish all my life, my small note for every single person on the unit. My dearest @iaasifsheikhofficial . My friends @rohitashvgour @yogesh.tripathi78 @vaibhav.mathur.teeka @deepeshbhan @saleem_zaidi @saanandverma (missed you on the last day). 5 lovely years of #bhabhijigharparhai with @andtvofficial @zeetv and thanks to my producers Mrs Benaifer Kohli and Sanjay Ji . The video work is from @raajjchatterjii and Ganesh

Recently, in an interview with Bombay Times, Saumya Tandon spoke about leaving the show. She told BT: "You can say that it's an impractical decision to quit a stable job, that too, in an established show. But I realised that being employed and earning a regular income was not exciting enough anymore. I want to do projects where there is scope for growth as an artiste. Having said that, it does not mean that Bhabi Ji Ghar Par Hai did not contribute to my growth. I had a beautiful journey on the show. However, I have played this character for five years now and I don't see myself doing it for another five years."