Total Dhamaal released today. It is the third film in the Dhamaal franchise 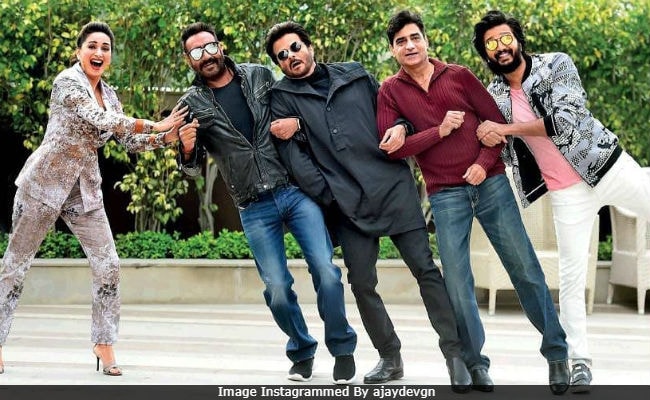 On Total Dhamaal day, Ajay Devgn treated us to a yet new picture from the film's promotion diaries and hilariously captioned it, "Ek Madhuri sab pe bhari." Yes, indeed, that's how the 49-year-old actor described the picture, in which Madhuri Dixit appears to support or balance her co-stars Ajay Devgn, Anil Kapoor, director Indra Kumar and Riteish Deshmukh, who are leaning against each other. The photo has been taken while team Total Dhamaal were promoting their film in New Delhi earlier this week. Soon, Madhuri shared Ajay's post and tweeted: "Yeh hai Total Dhamaal ka kamaal. It was wonderful being one of the boys." (LOL)

"Total Dhamaal picture" and "pure Bollywood pe bhari are some of the comments on the post." Take a look.

Yeh hai #TotalDhamaal ka Kamaal It was wonderful being one of the boys https://t.co/scvq6lofMW

Total Dhamaal released today. It is the third film in the Dhamaal franchise. Ajay Devgn, Anil Kapoor and Madhuri Dixit are the new additions to the Dhamaal family while Riteish Deshmukh, along with Jaaved Jaaferi and Arshad Warsi, has starred in all the three films.

On Wednesday, Riteish Deshmukh kept the Internet busy with a tweet of his, in which, he asked his fans and followers to guess what Ajay Devgn is telling them in this picture:

What do you think @ajaydevgn is telling us - @AnilKapoor@MadhuriDixit@Indra_kumar_9 (everyone in the pic should also reply including AJ) - #TotalDhamaal replies will be retweeted pic.twitter.com/MYMXY8dssv

While the Internet was busy figuring out the answer, Ajay Devgn himself revealed what he was saying to the others: "Shaant ho jao, tum logo ki bhi chalegi!"

Actor Suniel Shetty also posted his best wishes for the team and wrote: "Having known most of you as dear friends, I'm sure so many pranksters coming together, has to mean Total Dhamaal. Wishing you all the very best."

Thank you Anna -love you @SunielVShettyhttps://t.co/W4eBoS38zM