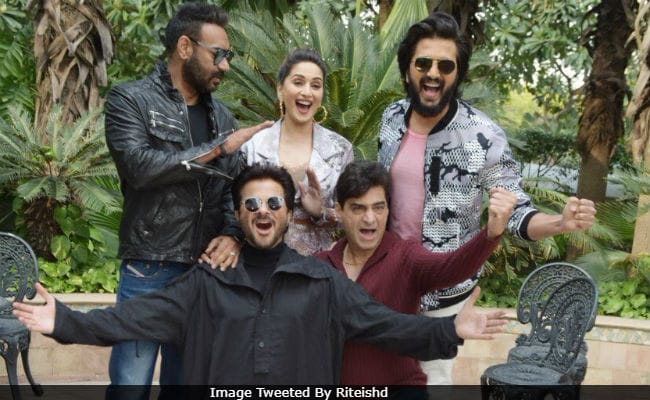 You can stop guessing what Ajay Devgn is telling his Total Dhamaal co-stars in this picture posted by Riteish Deshmukh. After his colleagues took turns to guess what Ajay Devgn was saying when this picture was taken, the 49-year-old actor tweeted: "Shaant ho jao, tum logo ki bhi chalegi!" In the picture, the team of Total Dhamaal can be seen cheering as they posed together. The image also features Total Dhamaal actors Anil Kapoor and Madhuri Dixit and their film director Indra Kumar. "What do you think Ajay Devgn is telling us? Everyone in the picture should also reply including Ajay Devgn. - #TotalDhamaal replies will be retweeted," read Riteish's tweet. And this was Ajay Devgn's reply:

What do you think @ajaydevgn is telling us - @AnilKapoor@MadhuriDixit@Indra_kumar_9 (everyone in the pic should also reply including AJ) - #TotalDhamaal replies will be retweeted pic.twitter.com/MYMXY8dssv

Team Total Dhamaal are currently promoting their film New Delhi. It is the third film in the Dhamaal franchise. Riteish Deshmukh, along with Jaaved Jaaferi and Arshad Warsi, has starred in all the three Dhamaal films.

Total Dhamaal, earlier scheduled to hit the screens in December, is now releasing this Friday (February 22). The release date was postponed due to some post-editing procedures.

Actor Suniel Shetty also posted best wishes for the team of Total Dhamaal. He wrote: "Having known most of you as dear friends, I'm sure so many pranksters coming together, has to mean Total Dhamaal. Wishing you all the very best."

Thank you Anna -love you @SunielVShettyhttps://t.co/W4eBoS38zM

Meanwhile, after the Pulwama terror attack, in which 40 CRPF personnel were killed, Ajay Devgn announced that Total Dhamaal will not release in Pakistan. "In light of the current situation, the team of Total Dhamaal has decided to not release the film in Pakistan," the 49-year-old actor tweeted.

In light of the current situation the team of Total Dhamaal has decided to not release the film in Pakistan.