Kareena Kapoor and Priyanka Chopra will be the last guests on Karan Johar's show. 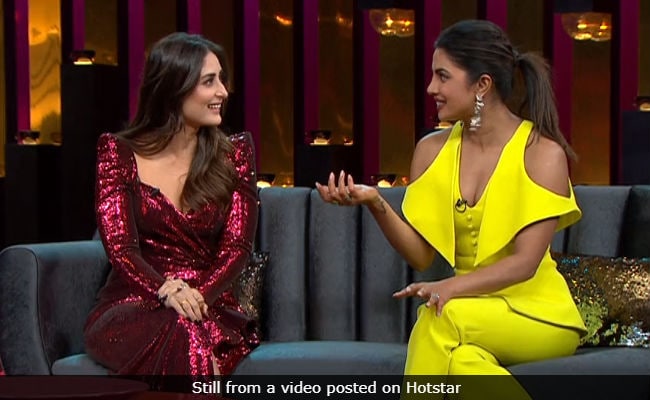 Priyanka Chopra and Kareena Kapoor are all set to bring the curtain down on the ongoing season of Koffee With Karan in style. Glimpses of the upcoming season finale were shared on the social media handles of Star World India. In one of the promos, Kareena tells her Aitraaz co-star, "Don't forget your roots" after the Fashion actress said that she didn't know whom Varun Dhawan is dating (ICYDK, that's Natasha Dalal). "So, now you only know about Hollywood actors?" Kareena added. Priyanka has been shuttling between India and the US after she signed up for American television series Quantico four years ago. Priyanka's last Bollywood film was 2016's Jai Gangaajal and she's made three Hollywood films in the last two years.

Priyanka Chopra recently married singer Nick Jonas. On Koffee With Karan 6, when Priyanka failed to give the name of the Jonas Brothers' first music album, Kareena said: "How can you not know?" and she replied, "Because I didn't Google him before I married him."

Here are promos of the upcoming episode of Koffee With Karan:

Kareena Kapoor and Priyanka Chopra share a controversial Koffee bond vis-a-vis their previous appearances on the show. In 2010, Kareena appeared on the show with Saif Ali Khan and while talking about Priyanka, she said, "Where does she get that accent from?" Two episodes later, Priyanka sat on the Koffee couch with Shahid Kapoor (Kareena's ex-boyfriend) and when Karan Johar told her about Kareena's comment, she replied: "The same place where her boyfriend gets it from."

However, on Koffee With Karan 5, Kareena credited Priyanka for representing India on a global platform like never before.

"The Hands You Raise In Love Are My Strength:" Amitabh Bachchan, COVID-19 Positive, Writes For His Fans