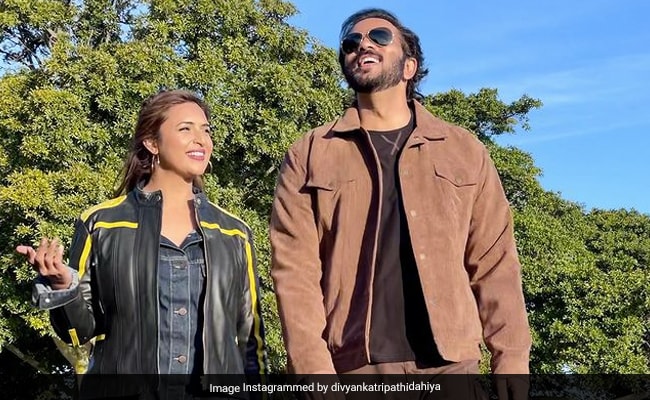 The latest social media update by Divyanka Tripathi features filmmaker Rohit Shetty. The actress shared behind-the-scenes stills on Instagram from the sets of Khatron Ke Khiladi season 11. He is seen having a chat with the star contestant in the images. Divyanka, in a denim dress and leather jacket, looks quite impressed with her conversation with the Golmaal director. Divyanka wrote in the caption, “Fascinated by the multi-faceted personality of Mr Shetty who is a mix of a fantastic director, engaging anchor and in our case even a stunt coach.” She added, “In deep conversation...Or are we? Guess the topic.”

Divyanka's co-participants from the show also posted moments with Rohit Shetty on the photo-sharing app. Actor Abhinav Shukla's snap with the host was captioned as, “With the super taskmaster.” The former Bigg Boss contestant is seen in olive wear with a similar leather jacket as Divyanka's.

Shweta Tiwari treated her fans to a photo where she is seen twinning with Rohit Shetty. The Kasautii Zindagi Kay actress could not withhold her appreciation for the director. The note went on as, “The power of this man is commendable! He knows the art of finding the individual strength of each team member. The true Khiladi of KKK.” Shweta even added a hashtag as, “Alpha personality.”

Varun Sood is another contestant who is highly smitten by Rohit Shetty's aura. The Ace Of Space fame dropped two happy pictures with Rohit Shetty. The caption read, “The man, the legend.” Varun's girlfriend, actress Divya Agarwal commented, “Was waiting for this one.”

Just An Adorable Pic Of Aly Goni With His Niece. See What He Wrote