Dia Mirza Responds To An "Interesting Question": "This Marriage Is Not A Result Of Pregnancy"

"Firstly, we didn't marry because we were having a baby together. We were already marrying as we wanted to spend our lives together," wrote Dia Mirza 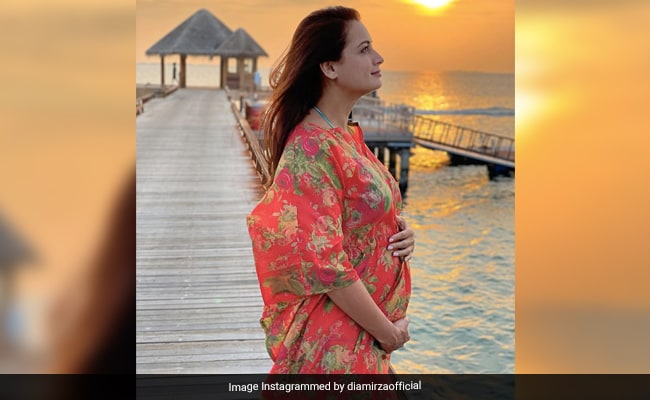 Dia Mirza made the pregnancy announcement with this photo (courtesy diamirzaofficial)

Actress Dia Mirza, replying to a user on Instagram, revealed the reason behind delaying her pregnancy announcement till after the wedding. The 39-year-old actress got married to businessman Vaibhav Rekhi in February. Just last week, Dia made the pregnancy announcement with a photo of hers from the Maldives, which prominently revealed her baby bump. A few days after Dia Mirza shared the gorgeous baby bump photo, she spotted a comment from a user who enquired about why didn't she make the pregnancy announcement before the wedding. Responding to the follower, Dia Mirza said it was solely because of "medical reasons" and that the timing of the wedding had nothing to do with it.

"She tried to break the stereotypes with woman priest, why couldn't she announce her pregnancy before the marriage?" asked the user. In response, Dia Mirza said she found out about her pregnancy while planning the wedding but decided to wait it out "until we knew it was safe": "Interesting question. Firstly, we didn't marry because we were having a baby together. We were already marrying as we wanted to spend our lives together. We discovered we were going to have a baby while we were planning our wedding. So this marriage is not the result of pregnancy. We didn't announce the pregnancy until we knew its safe (medical reasons). This is the happiest news of my life. I've waited for many many years for this to happen. No way I would hide it for any reason other than medical." 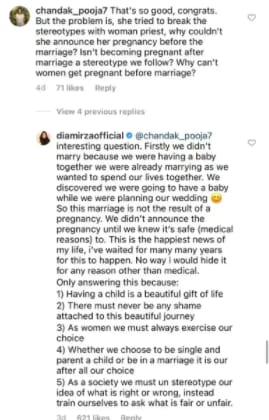 Dia Mirza was previously married to Sahil Sangha. They separated in 2019 after 11 years of togetherness. Dia Mirza and Vaibhav Rekhi got married on February 15 in a close-knit ceremony, attended only by friends and family. On her recent trip to the Maldives with husband Vaibhav Rekhi, they were also accompanied by Vaibhav Rekhi's daughter with his first wife Samaira.

Dia Mirza, a former beauty queen, is best known for starring in films such as Rehnaa Hai Tere Dil Mein, Sanju, Dum, Dus and My Brother... Nikhil, among others. She was last seen in the 2020 film Thappad. Dia Mirza is also a United Nations Sustainability Development Goals Advocate.