Dhadak's Zingaat: Janhvi Kapoor And Ishaan Khatter Had 'No Pressure' To Recreate The Song

Zingaat, the popular song from Sairat, has been recreated for Janhvi Kapoor and Ishaan Khatter's Dhadak 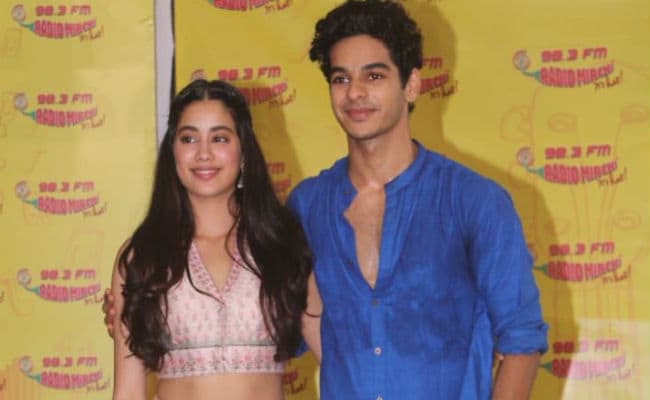 Zingaat, the popular song from Marathi blockbuster Sairat, has been recreated for Janhvi Kapoor and Ishaan Khatter's Dhadak. While Zingaat from Sairat went on to become a chartbuster, Janhvi and Ishaan said that they 'did not take any pressure in recreating the song,' reports news agency PTI. The Hindi version of Zingaat, picturised on Janhvi and Ishaan for Dhadak, released today and it's fun to watch them. "There was no pressure. We wanted to make a good song, something that is true to our film but we didn't take any pressure. We were trying to play our characters, trying to make our director happy and listening to Farah Khan (choreographer) ma'am," Janhvi said, PTI reports.

Zingaat appears to be special for Farah also, who came out of her 'choreographic retirement' for the song. Here's what she tweeted.

Worth coming out of Choreographic retirement for!! #Zingaat@karanjoharhttps://t.co/3MO1aYVDy4

Of recreating Zingaat, Ishaan said the song has a universal appeal and so they wanted to "capture the moment and be sincere to it".

Isn't it fun to watch Janhvi and Ishaan? Sure Janhvi is looking charming and killing everyone with her looks but it's Ishaan who has stolen the spotlight and sets the stage on fire with his energy.

"Farah and Shashank Khaitan's idea was that we will not choreograph too much, we will define a hook step and then we will just let go, let people dance the way they want to when they listen to the song. We wanted to capture that," Ishaan said.

Of retaining the word 'zingaat' in the song, director Shashank Khaitan said, "It doesn't even have a defined meaning, it suggests being carefree. The way we have used it, 'naache zing-zing-zingaat' would suggest to dance carefree. So I don't think there should be any problem with it."

Dhadak is a remake of Sairat. Janhvi and Ishaan's film is set in Rajasthan.

Promoted
Listen to the latest songs, only on JioSaavn.com
Dhadak releases on July 20.