Dhadak Song Zingaat: How Excited Are Janhvi Kapoor And Ishaan Khatter? This Much 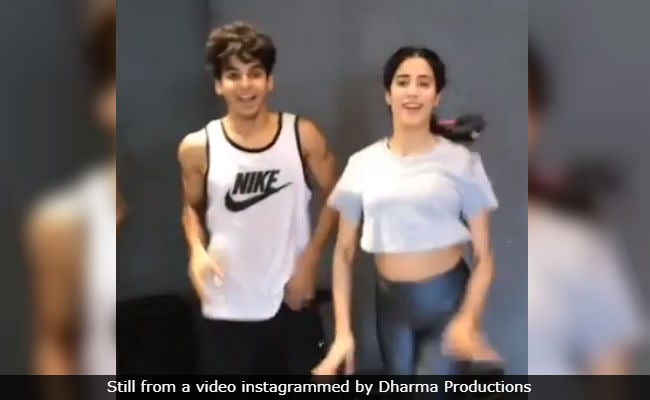 Janhvi Kapoor and Ishaan Khatter are excited about tomorrow's big Dhadak moment when the second song from their film will hit the Internet. The song in question is titled Zingaat, which first appeared in Marathi film Sairat and it was picturised on its lead actors Rinku Rajguru and Akash Thosar. Janhvi and Ishaan's film is the Hindi adaptation of Sairat and everyone's eagerly awaiting the film's release. But before that, we and team Dhadak have Zingaat to look forward to. Dharma Production's Instagram handle shared an adorable video of Ishaan and Janhvi translating their Zingaat energy into dance and it was captioned: "Safe to say they are excited for tomorrow! #Zingaat."

Safe to say they are excited for tomorrow! #Zingaat @janhvikapoor @ishaan95 @dhadak_2018 #Dhadak

Farah Khan has choreographed Janhvi and Ishaan in Zingaat and from the little that we know about its Dhadak version, Farah has retained the signature steps of the Marathi blockbuster song. The trailer of Dhadak features a snippet of Zingaat:

Excited about the full version tomorrow?


Before Zingaat, the makers of Dhadak released the film's title track, which won the Internet:


Promoted
Listen to the latest songs, only on JioSaavn.com
Dhadak, like Sairat, is the story of two young lovers and how they defy all societal norms to live together only fate has a different plan for them. Director Shashank Khaitan said that his film uses the premise of Sairat but Dhadak is set in a different city and with different issues, which have been highlighted in the film.