Dhadak: Janhvi Kapoor Shares A BTS Photo With Ishaan Khatter And We Are Left Wondering What The Joke Is All About

The photo shared by Janhvi is a shot of the actors laughing their heart out to some "inside jokes" we are assuming. 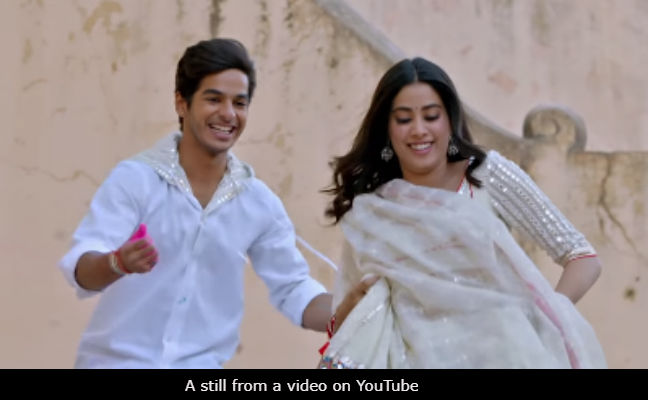 New Delhi: Dhadak co-stars, Janhvi Kapoor and Ishaan Khatter indulged in some "behind-the-scenes" fun and a photo shared by the actress on her Instagram handle features them giggling at some hilarious joke (we are guessing). The photo shared by Janhvi is a shot of the actors laughing their heart out to some "inside joke" we are assuming. The duo had a great time on sets and this latest photo shared by Janhvi is proof. "Meanwhile behind-the-scenes," Janhvi Instagrammed the photo with this caption. Two hours past, the photo has garnered over 1 lakh likes. One comment read: "Romantic Jodi in the romantic city of Udaipur. Love from Udaipur." Other comment read: "What beautiful smiles." Take a look at the picture:

Meanwhile behind the scenes....

Dharma Production's official Twitter handle has also shared the photo and captioned it: "Meanwhile, behind-the-scenes Janhvi and Ishaan just cannot get enough of their inside jokes!"

Meanwhile, behind the scenes #Janhvi & #Ishaan just cannot get enough of their inside jokes! #DhadakTitleTrackpic.twitter.com/ADo7KDpLBW

Meanwhile, after the trailer release of Dhadak, the makers are now all set to unveil the title track of the film on Wednesday. This is a reason enough to rejoice for all fans of Janhvi Kapoor and Ishaan Khatter:

The title song of #dhadak is out tomorrow!! #janhvi#ishaan@ShashankKhaitan@ZeeMusicCompanypic.twitter.com/U7x7AYC6me

After the trailer launch of Dhadak, not just fans but Bollywood celebs were raving over the onscreen chemistry of Janhvi and Ishaan. The trailer went viral and has 35 million views already. Take a look at the Dhadak trailer here:

Dhadak is an adaptation of Marathi blockbuster Sairat. Of the film's plot, Shashank Khaitan had earlier said, "The basic premise (of Dhadak and Sairat) is same. But there are variations. My story is based on another set up. It is (set) in Rajasthan. It comes with its own challenges, conflicts and style of a love story."

Dhadak, produced by Karan Johar's Dharma Productions, is all set to hit the screens on July 20.
Comments
dhadak janhviDhadak songs