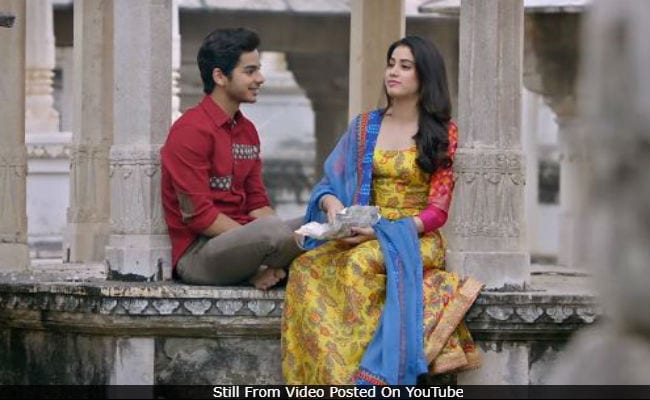 New Delhi: The first song of Janhvi Kapoor and Ishaan Khatter's upcoming film Dhadak is here. It's the title track of the film and traces Janhvi and Ishaan's love story. The song is every bit soothing and the duo's sweet romance is sure to win over your hearts. In the video, we see Madhur (Ishaan) doing everything possible to get a glimpse of Parthavi (Janhvi). And, she loves it too. He follows her in the market, to her dance practise sessions and other places. (Parthavi even teacher Madhur some dance steps). Dhadak title track is pictured on the love they share and the duo are totally smitten by each other. It is sung by Shreya Ghoshal and Ajay Gogavale while the lyrics courtesy goes to Amitabh Bhattacharya.

Dhadak is a story of Janhvi Kapoor and Ishaan Khatter's love and heartbreak. When their families oppose against their relationship, the duo run away from their houses but things get worse.

The Shashank Khaitan-directed film is a remake of Marathi blockbuster Sairat, starring Rinku Rajguru and Akash Thosar. At the trailer launch of Dhadak, Janhvi had revealed that she told Sridevi that she also wanted to do a film like Sairat.

Promoted
Listen to the latest songs, only on JioSaavn.com
"I saw Sairat with mom at home and I remember telling her 'I wish that this was my first film and I could do something like it'. Me and mom had this big discussion on how she wanted a role like this for me and then you (Karan Johar) called and it happened," Janhvi said, news agency PTI reported.