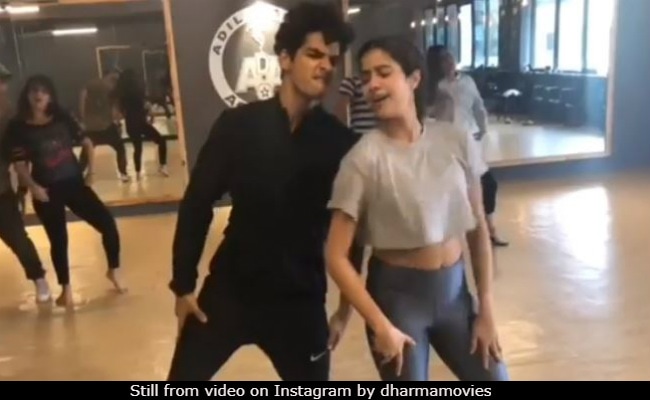 We are still recuperating from the awesomeness of Ishaan Khatter's brilliant dance moves and Janhvi Kapoor's charming expressions in Zingaat, the second song from Dhadak. But so what? The makers of the movie released yet another video of Zingaat - the unofficial version, in which Janhvi Kapoor and Ishaan Khatter can be matching steps to coordinated choreography in a dance studio and it is such a delight to watch the Dhadak duo set the floor on fire! In the video, Janhvi's antics are cuteness overloaded - she's dressed in a grey crop top and workout pants, with her hair neatly braided in a hair-do. The video, shared on Dharma Productions' Instagram page, has also gone crazy viral and is breaking the Internet simultaneously.

The video, which has been shared with the caption: "Watch them slay, all day!", will prove to be an absolute delight for Janhvi Kapoor's fans because in the film version, Janhvi was mostly seen grooving to the beats while in the new video, she can be seen in scintillating dance moves.

Here's a glimpse of Janhvi and Ishaan's unparalleled swag on the dance floor.

Here's the film version of the song.


Promoted
Listen to the latest songs, only on JioSaavn.com
Janhvi Kapoor's Dhadak is the Hindi remake of critically acclaimed Marathi film Sairat, and the Hindi version of Zingaat is a redux of the original song featured in the Marathi movie. So, was there any pressure to recreate the song? Apparently not, Janhvi told PTI at the song launch: "There was no pressure. We wanted to make a good song, something that is true to our film but we didn't take any pressure. We were trying to play our characters, trying to make our director happy and listening to Farah Khan (choreographer) ma'am."