Devi Poster: Kajol And Sisterhood Are Fierce And Fearless

"A tale of nine women navigating through an unusual sisterhood thrust upon them by circumstance," wrote Kajol 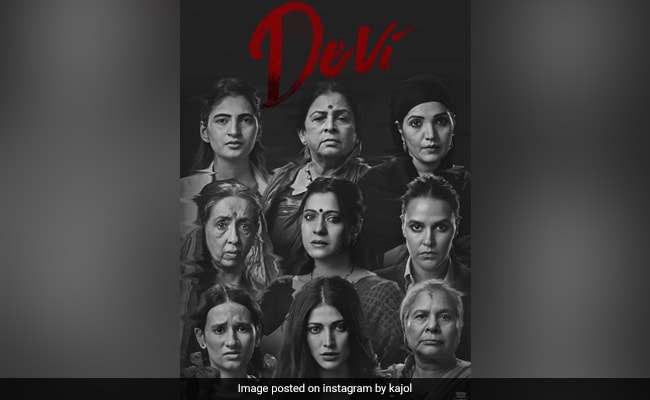 The makers and the cast of short film Devi announced the release date of its teaser on Thursday. It is scheduled to drop on the internet on February 24. The announcement came with a new poster of Devi featuring the whole cast. The film stars nine Bollywood actresses including Kajol, Neha Dhupia, Shruti Haasan, Neena Kulkarni, Mukta Barve, Sandhya Mhatre, Rama Joshi, Shivani Raghuvanshi, and Yashaswini Dayama. Devi has been directed by Priyanka Banerjee and produced by Electric Apples Entertainment for Large Short Films. Sharing the film's poster, Kajol wrote: "A tale of nine women navigating through an unusual sisterhood thrust upon them by circumstance. The teaser of our powerful short film drops on February 24, 2020!"

Earlier, Kajol had shared a glimpse from the shoot diaries of Devi on her Instagram profile. Accompanying her post, she wrote: "BTS of Devi. Thank you, Niranjan Iyengar (Producer) and Ryan Stephen (Producer) for making me a part of this statement. Some things need to be seen to be understood on a deeper level."

Kajol was last seen in Tanhaji: The Unsung Warrior opposite her actor-husband Ajay Devgn. The film is a period drama in which Ajay plays the titular role on Tanaji Malusare and Kajol as his wife Savitribai Malusare. Saif Ali Khan also featured in Tanhaji. Directed by Om Raut, the film's total box office collection was Rs 118.91 crore in the first week.