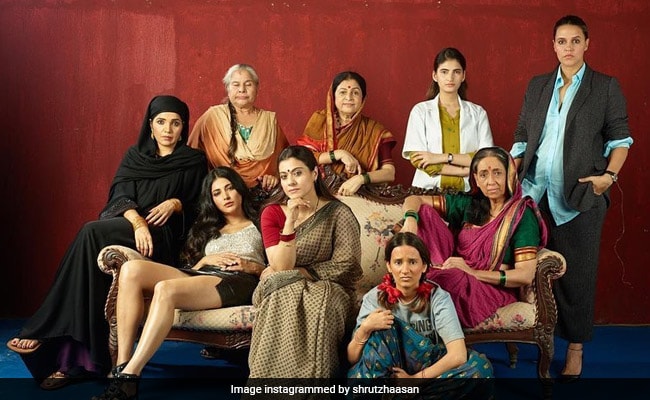 The makers of Devi shared the first look from the film and powerful can't even begin to describe it. The film's ensemble cast includes some of the finest Bollywood actresses of the current times. The short film, which will be directed by Priyanka Banerjee and produced by Electric Apples Entertainment for Large Short Films, stars Kajol, Shruti Hassan, Neha Dhupia, Neena Kulkarni, Mukta Barve, Sandhya Mhatre, Rama Joshi, Shivani Raghuvanshi, and Yashaswini Dayama. Devi will be Kajol and Shruti Haasan's first short film. Sharing her association with the film, Shruti Haasan wrote: "My first ever short film with these incredible women," while Neha Dhupia wrote: "So stoked to be a part of this power pack."

Meanwhile, Kajol shared a BTS picture from the sets of the film on her Instagram profile. Dressed in a saree, a teary-eyed Kajol can be seen staring intensely into the camera. She captioned the photograph: "BTS of Devi ...Thankyou Niranjan Iyengar and Ryan Ivan Stephen for making me a part of this statement... Some things need to be seen to be understood on a deeper level."

On the work front, Kajol was last seen in the period drama Tanhaji: The Unsung Warrior, in which she played the role of Tanaji Malusare's feisty wife Savitribai Malusare and her husband Ajay Devgn played the titular role.

Kajol, who has earlier shared screen space with Neha Dhupia in the 2018 film Helicopter Eela, will co-star with Shruti Haasan for the first time.

Shruti Haasan has starred in several Tamil as well as Bollywood films. She stepped into Bollywood with the 2009 film Luck, co-starring Imran Khan. She has also been a part of films such as Welcome Back, Ramaiya Vastavaiya, Dil Toh Bachcha Hai Ji and D-Day among others.