One of Sabyasachi's posts has been called a 'non-apology,' 'damage control' and a 'cover up.' 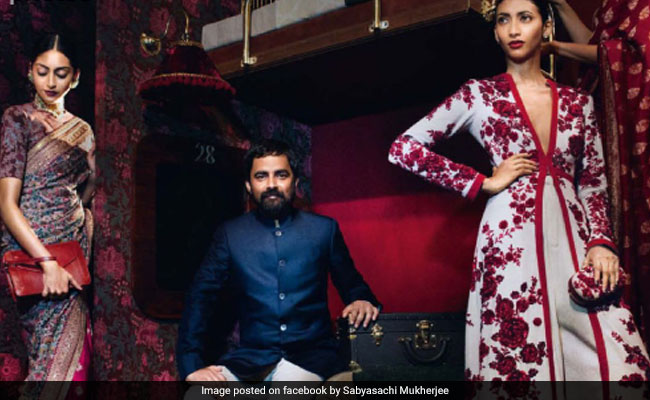 Sabyasachi has found himself in a fresh controversy (courtesy sabyaofficial)

Designer to the stars Sabyasachi Mukherjee has found himself in a fresh controversy after first mansplaining 'overdressed' and 'caked with makeup' women in an Instagram post, and then mansplaining the mansplain in a second post. It hasn't earned him the forgiveness of social media - quite the opposite, in fact. First, Sabyasachi said that women wearing what might be considered OTT looks are fractured inside; then, he said they might be mentally ill and that he had used clothes to cope with depression as a teen. His calculus of fashion, beauty and emotional damage has been soundly rejected in the comments, where Sabyasachi has been schooled at several levels.

Many comments on Sabyasachi's second post rebuked him for using his own battle with mental illness to make assumptions about and pass judgement on others - the very thing he advocates against in his post. "Your depression is not a justification. Mental health is not to be romanticised. You do not get to speak for women," read one comment; "Probably first step of this empathy would be to not categorise women as overdressed, underdressed or any label as such," read another; "You do realise you are doing the exact same thing? Assuming a person likes to dress good because they are 'broken' is judgmental as well," read a third comment; others called the post a 'non-apology,' 'damage control' and a 'cover up.'

Sabyasachi's first post was received with almost unanimous outrage. One furious comment reminded the designer that his own creations promote the sort of sensibility he thinks is a symptom of being 'wounded': "Imagine having made ALL your money out of selling to women this idea of beauty that requires exorbitant spending on maintaining an aestheticism and then shaming them exactly for that." Another agreed: "By this definition, every one of your brides is a 'broken' woman." A third comment read: "Stop selling this melancholic idea of 'overdressed women who are wounded' to sell your overpriced and garish jewellery. Patronising and absolutely demeaning."

On Sunday, three days after his original post in which he called 'overdressed' women 'bleeding inside,' Sabyasachi posted a continuation in which he linked what he described as 'tacky or inappropriate' outfits to mental health and revealed that he himself struggled with depression as a teen and used 'radical clothing choices' - for which he says he was bullied - as a defence. Sabyasachi apologised for making a 'blanket statement' in his first controversial post but appeared to stand by the essence of his argument about women using clothes and makeup to mask emotional damage - many women, Sabyasachi wrote in his second post, use fashion as 'retail therapy to fill the gaps and voids in their lives.' Turns out, his posts and deep thoughts on the inner lives of women were to promote his new jewellery collection, based on the Tagore short story Monihara, in which the female protagonist channels her personal issues into an obsession with jewellery.

A post shared by Sabyasachi Mukherjee (@sabyasachiofficial) on Jul 5, 2019 at 8:10am PDT

I thought a lot about whether to post this, but sometimes it is important to set the record straight and get the right message across. Having been in the fashion industry for over 20 years, I have encountered it firsthand and commented about it in many of my interviews - how, while many women use fashion and beauty for joy and self-expression, others use it as 'retail therapy' to fill in the gaps and voids in their lives. We, as a society, often get extremely judgemental about peoples' clothing choices, calling them 'overdressed' or 'tacky' or 'inappropriate'. We fail to understand that maybe some are using these as coping mechanisms to put on a brave front to make up for the lack of a support system. The true essence of the post was to ask people to be aware, empathetic, and not judgemental of peoples' personal clothing choices, which could be a manifestation of their internal anguish. One of the bigger issues in society today, that very few people address, is mental health, and a little bit of awareness, empathy and kindness go a long way in acknowledging it. I have coped with crippling depression as a teenager for 7 years. I found my coping mechanism through radical clothing choices.I was sneered at and bullied, but it helped me find my way again. When I was creating this jewellery collection, I referred to Tagore's 'Monihara' because it talks about these issues, which are sadly more relevant today. And I, for one, have never shied away from speaking about uncomfortable truths, no matter how disruptive it might be for my personal gain. Because when power is given, social responsibility should not be shunned. The mistake, however, was to use the reference as a blanket statement, as sometimes when we are passionate about an issue, we end up becoming overzealous and hence, tone deaf. My sincere apologies for that. The original post (however flawed) was put up to invite introspection and debate about how love, sensitivity and compassion, alongside expressions of art, beauty and fashion can create a net positive in the world. I invite everyone to democratically join this debate. Regards, Sabyasachi

Sabyasachi seems to regularly find himself in a controversy of his own making. Last year, he was pilloried for claiming he had dressed actress Deepika Padukone for her wedding in Italy. After writing 'in head-to-toe Sabyasachi' in a wedding fashion post, the designer was forced to retract and give credit to Bengaluru store Angadi Gallery from whom Deepika's wedding kanjeevaram had been bought. A couple of years ago, Sabyasachi also prompted scorn and fury by publicly shaming women who don't know how to drape sarees.