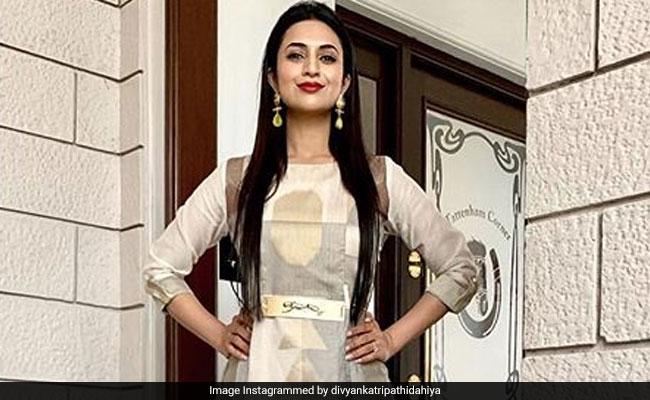 TV star Divyanka Tripathi featured in a recent post on Diet Sabya's Instagram, which bluntly pointed out how similar a belt she wore is to the Bengal Tiger belts from Sabyasachi's signature collection. The Yeh Hai Mohabbatein actress was quick to spot the feature on Diet Sabya (an anonymous but verified Instagram account known for exposing designer rip-offs) and responded with a sternly-worded comment. While she admitted to the "fashion crime," Divyanka lashed out at Diet Sabya for "being inhuman and harsh". "My genuine ignorance may be a big fashion crime for you but you guys definitely have the guts to be rude to another level. Thanks for pointing out the mistake, no thanks for being inhuman and harsh," she wrote in the comments section. 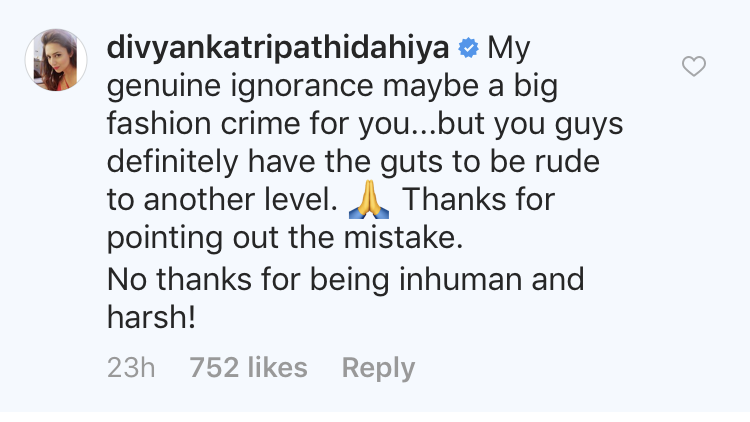 Diet Sabya's Instagram post featured a collage of Aishwarya Rai Bachchan (sporting the original Sabyasachi belt) and a photo shared by Divyanka recently. "Y'all will often tell us not to blame the celebrity, but you've to live under a giant rock to not know that this is an iconic Sabyasachi belt," read the caption. In her own post, Divyanka had credited a label named Rimayu for her accessories - she had paired the belt with an ivory and gold long dress. "A simple dress can enhance your elegance and classy accessories can lift up the look. Just plan how you want to look for the event and work your way around it," read her caption.

#Guts On A Sunday afternoon!! . . . Y'all will often tell us not to blame the celebrity, but you've to live under a giant rock to not know that this is an iconic @sabyasachiofficial belt. NO excuses!! . . #dietsabya #Gandi #copy #lol #

A simple dress can enhance your elegance and classy accessories can lift up the look. Just plan how you want to look for the event and work your way around it. Outfits @raisin.global Make up hair @manoj.regina Earings n belt @rimayu07 Styled @stylingbyvictor Assisted by @mughalsohail_ #TipOfTheDay

A post shared by Divyanka Tripathi Dahiya (@divyankatripathidahiya) on Jan 26, 2019 at 10:03pm PST

On Monday, Divyanka shared the screenshot of an Instagram user's comment slamming the "shallow and snide" post about her. "Sorry guys! I truly wanted to forget yesterday's episode when I was slammed and humiliated (by an Insta profile and it's followers) for wearing a belt slightly similar to a branded piece (which I was of course unaware of)," read a part of Divyanka's caption.

Sorry guys! I truly wanted to forget yesterday's episode when I was slammed and humiliated (by an insta profile and it's followers) for wearing a belt slightly similar to a branded piece (which I was ofcourse unaware of). But this comment!!!!!! I just couldn't resist putting up your comment on my post! MORE POWER TO YOU GIRL. YOU VERBALISED WHAT I WAS THINKING. EVEN I COME FROM A HUMBLE BACKGROUND! MAKING MOCKERY OF PEOPLE FOR THEIR DRESSING, IS SUCH AN ARROGANT AND HIGH-HANDED, HIGH SCHOOL SNOB ATTITUDE! THANK GOD, THIS HAPPENED WITH ME! ELSE, I WOULD NOT HAVE KNOWN THIS SIDE OF BULLYING WORLD. FEW MAY FEEL EMBARASSED AND KEEP SHUT...BUT I PREFER CALLING A SPADE A SPADE AND BULLYING- BULLYING! NOPE, I AM NOT A REGULAR CELEBRITY! I AM DIFFERENT BECAUSE "I AM NO DIFFERENT FROM PEOPLE WATCHING ME" & GETTING BULLDOZED FOR MY CLOTHING...WELL, NOT ACCEPTABLE! This happened to me and I felt so pressurised suddenly, felt like digging a hole and burrying my face. Imagine this happening with people who can't afford great dresses and designs, let alone a stylist or designer. In fact, NOT ALL CELEBRITIES AND STARS ARE RICH in contrast to a common expectation. Few become stars because of their QUALITY OF WORK and NOT WHAT THEY WEAR and HOW MUCH THEY EARN or FOR THEIR KNOWLEDGE OF FASHION WORLD! Everybody has a different forté! Bullying and belittling someone for that is SO DISHONORABLE, MEAN and VAIN! . (PS : I could be right or wrong but at least I don't keep shut when being humiliated! It's a lesson for my readers- "Speak up for yourself when oppressors think they are the bosses!") Aaahh!! Bol ke kaleje ko thandak mil gai

A post shared by Divyanka Tripathi Dahiya (@divyankatripathidahiya) on Jan 28, 2019 at 12:05am PST

Variations of the signature Sabyasachi belts with the Royal Bengal design is a big hit with Bollywood celebrities - Anushka Sharma paired one with her lehenga last year for her wedding reception in Mumbai. Aishwarya styled the belt separately with a saree and a dress for collaborative photoshoot for L'oreal and Sabyasachi. More recently, Deepika Padukone accessorised her Sabyasachi lehenga with a Bengal Tiger designed belt for the post-wedding party hosted by Ranveer Singh's sister Ritika Bhavnani.

For my maiden collaboration with L'Oréal, the festive collection had to kick off with a saree. I believe in things which are classic, timeless and hence, worthy of investment. Things and experiences that can be used again and again. A winged liner, a strong red mouth, wind-swept hair and a chic modern saree creates an iconic fashion statement this festive season. To be worn every single day. Because every day should be a celebration. Of yourself! #LorealParisxSabyasachi #Festive #Makeup #LorealParisIndia @lorealmakeup @aishwaryaraibachchan_arb #Sabyasachi #LimitedEdition #ImWorthIt @paris #PureRouge #Shade266 Shop the collection now. Link in bio.

A post shared by Sabyasachi Mukherjee (@sabyasachiofficial) on Oct 8, 2018 at 8:41am PDT 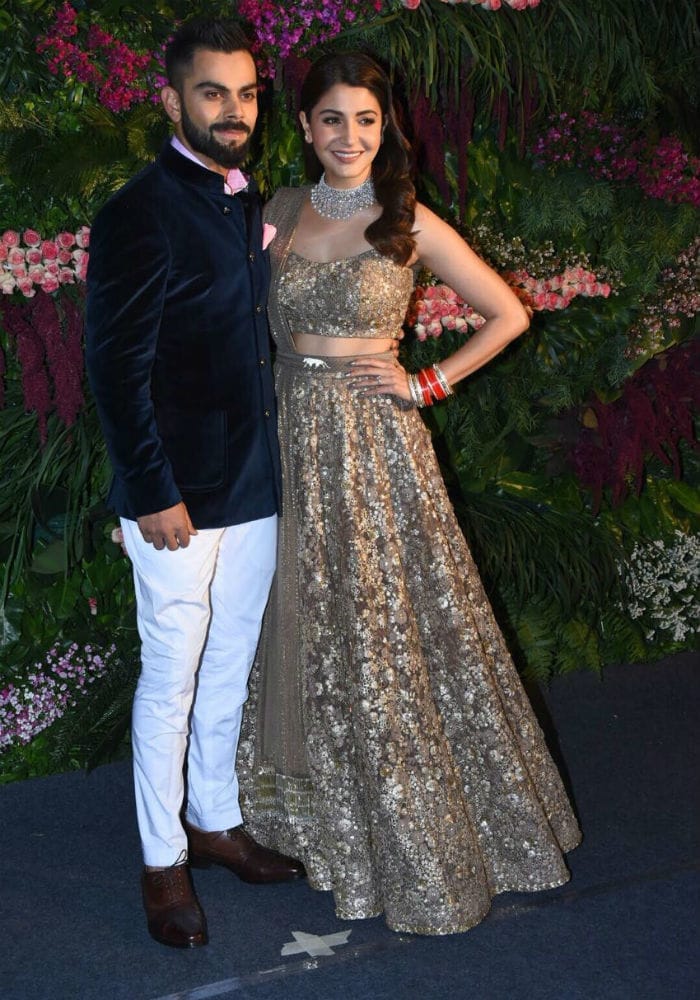 Anushka Sharma at her wedding reception

Divyanka Tripathi is best known for her roles in TV shows such as Banu Main Teri Dulhan and Yeh Hai Mohabbatein, in which she plays the lead role.