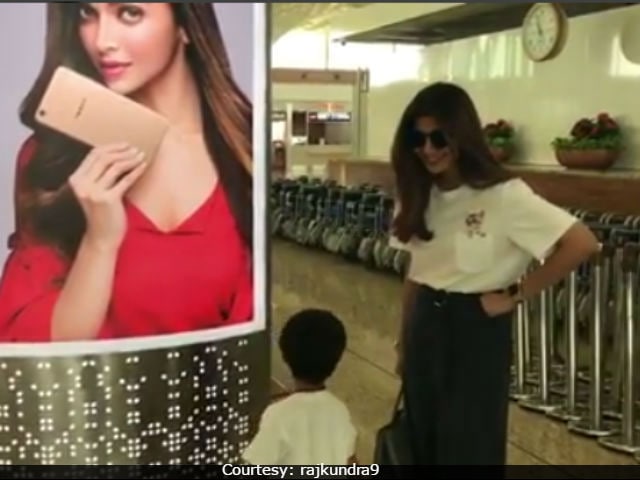 Shilpa Shetty with her son Viaan at the airport (Courtesy: rajkundra9)

New Delhi: What does a celebrity do when her four-year-old son announces to the world at large that his 'favourite actor' is not you but your colleague. You tap him smartly on the shoulder and say "Excuse me?" But not even the dread of maternal retribution cuts short the tiny traitor's declaration of undying love. "Deepika," he continues with mommy looming over him, "Deepika." The object of Viaan Kundra's affection, actress Deepika Padukone, thinks he's "adorable" - his mother Shilpa Shetty Kundra, not so much. But she's only joking, of course, when she pretends to be huffing over her little son's admiration for her colleague - or, at least, we hope she is.

Viaan's father Raj Kundra posted video of his son's betrayal of mommy on Instagram with an apology to wife Shilpa. "My son let the cat out of the bag, Deepika," he wrote in the caption:

Promoted
Listen to the latest songs, only on JioSaavn.com
In Viaan's defence, Shilpa Shetty, 41, shifted focus from films to fitness years ago while Deepika Padukone, 31, is in the prime of her career. Shilpa, star of films such as Baazigar and Dhadkan, last had lead roles in the 2007 films Life In A... Metro and Apne. Shilpa has lately been known as a yoga expert - she has an exercise DVD out - and activist for healthy living. She's in demand as a judge on dance talent shows like Jhalak Dikhhla Jaa and Super Dancer and produced the poorly received 2014 film, Dishkiyaoon. Shilpa Shetty and Raj Kundra married in 2009 and Viaan was born in 2012.