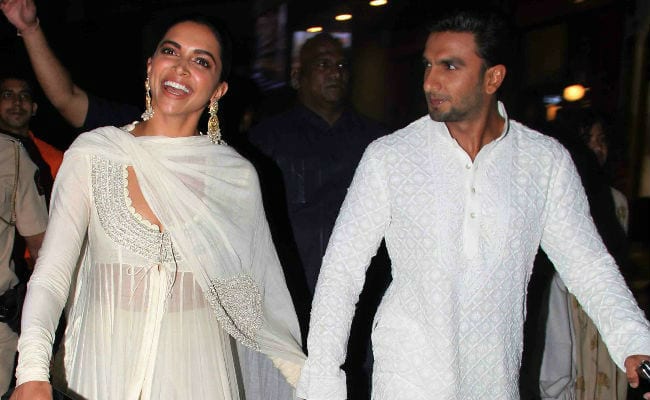 Deepika Padukone and Ranveer Singh at the screening of "Padmaavat" in Mumbai.

Deepika Padukone and Ranveer Singh have ensured that their wedding celebrations at Lake Como, Italy remains private and no photos from their pre-wedding events make it to the Internet. However, tidbits from their functions have been shared by sources and reportedly guests at the Italian wedding, which give a fair idea that Deepika and Ranveer's ceremonies are straight from a Bollywood film. Deepika and Ranveer arrived in Italy with their respective families over the weekend and the couple's engagement ceremony was held shortly after the arrival of all their guests - some 45 in number, reported mid-day. The engagement was reportedly followed by a formal sit-down dinner and the couple opted for western outfits for the occasion. "The ceremony was followed by a formal dinner where the couple thanked everyone for being part of their special occasion. The guests were categorically requested not to share any pictures from the function," the source said.

Perhaps, it was after the aforementioned ceremony that Ranveer's stylist Nitasha Gaurav tweeted this:

No pictures but it was love personified to see them together today. Couldn't stop my tears, but these were tears of happiness and so I hope they never do. #DeepVeerKiShaadi#ranveerkishaadi#foreverlove

In the days leading up to the wedding, a mehendi ceremony and a sangeet function were also hosted in Villa del Balbianello booked by the couple. At the sangeet ceremony, Deepika Padukone reportedly broke down after Shubha Mudgal performed a thumri. "When she broke down, Ranveer, who could understand her emotional state, walked up to her and hugged her tight and consoled his lady love. He ensured she was smiling again with all his crazy love antics," a guest at the wedding told Pinkvilla.

Another source told Pinkvilla that Ranveer Singh was in "his element" at the sangeet function and his enthusiasm was unmatched. "His happiness was evident and he made sure that it is one of the most unforgettable events of his life. The handsome hunk with his energy was seen grooving to the dhol beats. He was so excited that at one point he also took the dhol away and started playing himself and making the audience dance. Then he walked up to his lady love and played the dhol for her as she blushed. Then the duo was seen shaking a leg together while the DJ played some dhamakedaar music - which were a mix of retro and new songs," Pinkvilla quoted a source as saying.

Of course, no pictures or videos are available from the event. However, this picture is believed to be of the engagement venue:

A post shared by Deepika padukone fanpage (@deepikapadukoneforever) on Nov 13, 2018 at 5:39pm PST

Meanwhile, for her mehendi, Deepika reportedly picked an intricate design while Ranveer had 'DeepVeer' (a moniker given to them by their fans) written in henna on of his hands, reports Pinkvilla.

Deepika and Ranveer will get married reportedly as per South Indian tradition on November 14 and then on November 15 as per North India tradition, keeping up with Ranveer's Sindhi heritage. The couple's guest list includes only family members and close friends, including their respective entourages.