How To Break The Internet 101: Be Deepika Padukone And Ranveer Singh

"Should we Ring-a-Ring-a-Roses instead," writes Deepika Padukone in the caption of the post 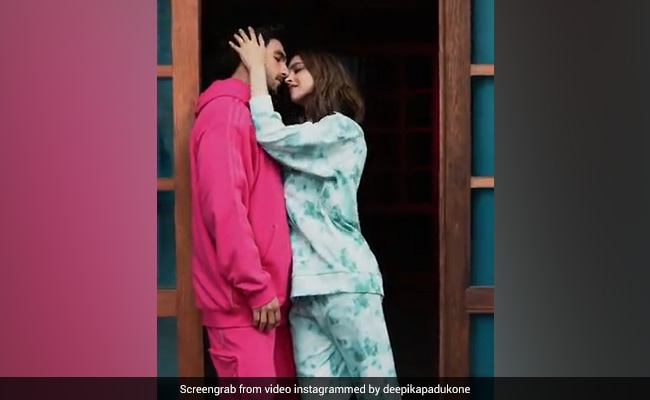 Screengrab from a video shared by Deepika Padukone.(Image courtesy: deepikapadukone)

The Internet might still not be over Deepika Padukone and Ranveer Singh's adorable pictures from yesterday, but the couple is back with another social media PDA. In the new video that Deepika shared on her Instagram, the couple can be seen getting really cosy with each other as they stand at the entrance of a door. The video features the celebrity couple wearing tracksuits. While Ranveer wears a bright pink track suit in the video, Deepika can be seen donning a white and green textured track suit. In the video the couple can be seen combining two trends. They combined the viral Silhouette Challenge with Ring a Ring a Rosies. "Should we Ring-a-Ring-a-Roses instead Ranveer Singh!?," Deepika wrote in the caption of the post.

Check out the trending video here:

Ranveer reacted to the post as he wrote: "Sure, we can call it that." The video begins with Ranveer walking towards the entrance of a room from one side while Deepika walks from the other side. Further in the video, Deepika can be seen leaning towards Ranveer with both her hands placed on his shoulders. It ends with both of them playing the famous Ring a Ring a Rosies but in a silhouette lens. Fans showered lots of love on the post with most of them dropping heart and fire emojis in the comments section of the post.

Meanwhile, Ranveer also shared two BTS boomerang videos on his Instagram account. The videos feature, Deepika standing with her hands on Ranveer's shoulders as she imitates biting him. Comparing it to Pacman eating the dots, Ranveer wrote: "Pac-Man eats the Dot," in the caption of the post.

This comes just a day after Ranveer Singh posted a set of pictures with Deepika on Instagram. In the pictures Ranveer can be seen gazing at Deepika affectionately without any intention of taking his eyes off her.

The celebrity couple keeps sharing such adorable posts with their fans on Instagram. Remember the quirky video that featured them dancing like nobody's watching? In the video, they could be seen dressed in funky tracksuits that had different motifs printed on them. "Werk it baby," Deepika wrote in the caption of the post.

Deepika Padukone and Ranveer Singh tied the knot in two separate kind of weddings in 2018. They firstly got married as per Konkani rituals, which was then followed by a North-Indian styled wedding.

In terms of work, they have co-starred in Ram Leela, Bajirao Mastani and Padmaavat. All three films have been directed by Sanjya Leela Bhansali. The real-life couple will once again be seen playing a reel life couple in the upcoming sports drama 83. While, Ranveer Singh plays former Indian cricketer Kapil Dev in the film, Deepika plays the role of Kapil Dev's wife Roma.