Dear Manish Malhotra, We Also Want To Know Why You Are Holding Your Head In Shabana Azmi's Pic

"Why is Manish Malhotra holding his head whilst we are having such a blast?" wrote Shabana Azmi 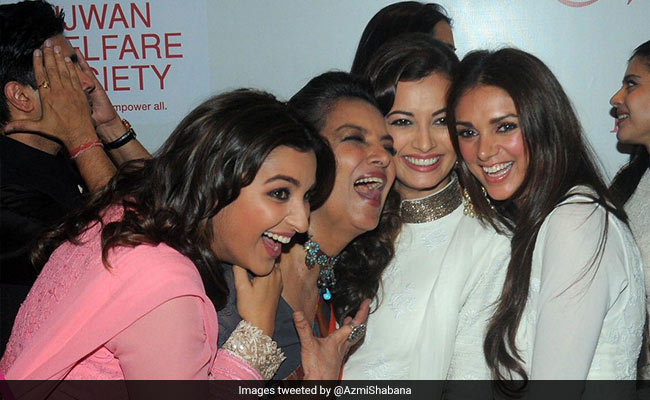 Shabana Azmi is always ready with LOL captions for her social media posts and her latest tweet proves it. The Fire actress recently shared a picture from an event organised by her NGO Mijwan Welfare Society (more on that later), in which she appears to be having a "blast" with Parineeti Chopra, Dia Mirza and Aditi Rao Hydari. Even though the Bollywood actresses are sprinkling stardust on the picture, it is designer Manish Malhotra's epic expression, which is stealing hearts on the Internet. Sharing the picture, Shabana pulled Manish's leg and wrote: "Why is Manish Malhotra holding his head whilst we are having such a blast?" Though Shabana didn't mention the year of the event in her tweet, the picture appears to be from Mijwan Fashion Show 2014.

Manish Malhotra and Mijwan Welfare Society share seven years of association. His label designs outfits for fashion shows organised by the NGO, which was founded by Shabana's father, late Kaifi Azmi, and is now being headed by her and Namrata Goyal, daughter of business tycoon Naresh Goyal.

Over the years, several celebrities such as Deepika Padukone, Ranbir Kapoor, Dia Mirza, Shah Rukh Khan, Malaika Arora and Anushka Sharma have walked the ramp at the fashion shows to support the cause of the NGO.

Now, take a look at the picture we mentioned above:

Why is@ManishMalhotra holding his head whilst we are having such a blast ? pic.twitter.com/NjY4usA3KU

On the work front, Shabana Azmi was last seen in Deepa Mehta-directed web-series Leila. She will next share screen space with Delhi Crimes actress Shefali Shah for a web-series produced by Vipul Shah. In the upcoming series, Shefali will be seen playing the role of a doctor, while Shabana Azmi will be the owner of the hospital.