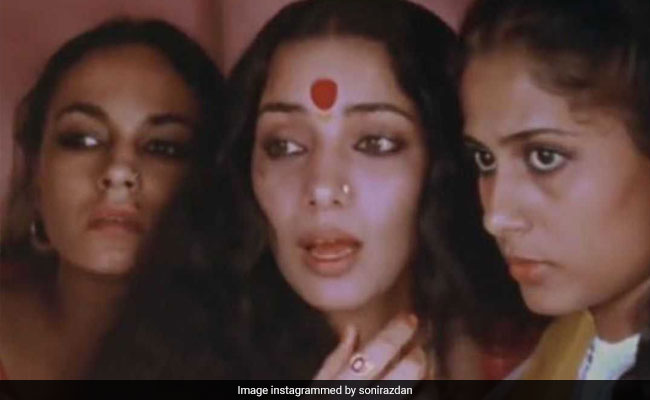 Soni Razdan delighted her fans with a rare throwback picture of herself along with Shabana Azmi and late actress Smita Patil. On Tuesday, the 62-year-old actress shared a picture from the sets of the Shyam Benegal's 1983 film Mandi, a film that depicted the lives of women staying in brothels and it touched upon the socio-political obstacles that they had to face. Besides Soni Razdan, the film also featured veteran actresses Shabana Azmi and Smita Patil among others. Soni Razdan captioned the post: "Memories of Mandi. Women In Indian cinema - Soni Razdan, Shabana Azmi and Smita Patil in Shyam Benegal's Mandi (1983)." Mandi was an adaptation of Ghulam Abbas' classic Urdu story Aanandi.

Earlier this month, Soni Razdan shared another throwback picture on her Instagram profile and she wrote: "Throwback to film Khamosh, shot in 1985." This is what we are talking about:

Soni Razdan, who shared screen space with her daughter Alia Bhatt for the first time in the 2018 film Raazi, frequently shares pictures from Alia's childhood days on her Instagram profile. Take a look at some of the posts here:

Then ... they were sweet little cuties. Now ... they are these gorgeous beauties#weddingdiaries #friendship #bestfriends #schoolfriends #congratulations #weddings #mybestfriendswedding

Oh my oh my where did the years fly ... Alia in Tamanna not a very long time ago

On the work front, Soni Razdan was last seen in the film No Fathers In Kashmir. She is best-known for her performances in films such as Trikaal, On Wings of Fir, Page 3, Khamosh, Monsoon Wedding and the recently-released Yours Truly.

Soni Razdan is married to filmmaker Mahesh Bhatt and the couple are parents to Bollywood actress Alia Bhatt and Shaheen, who launched a book on her battle with depression last year.