'If Alia Or Shaheen Bhatt Are Suffering, I Get Affected Badly,' Says Mom Soni Razdan

"So there are times when I might get sleepless nights because I am worried. Particularly in Shaheen's case, I was worried," said Soni Razdan 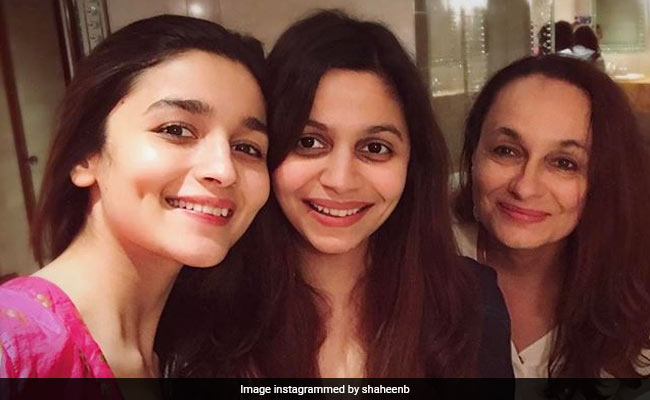 After Shaheen Bhatt recently opened up about her battle with depression, her mother and veteran actress Soni Razdan says she was always worried about her elder daughter and tried to be her pillar of strength.

In a TV interview, Shaheen talked about her book Never Been (Un)Happier, in which she has articulated about her tryst with depression and how incidents during her childhood pushed her into that direction.

Talking about how she emotionally balanced the situation, Soni told IANS: "I am a mother. Whether it is Alia or Shaheen, at any point in time, if they are suffering, I am the one who gets affected badly.

"I am the mother, and the emotional chord with my children is naturally strong. So there are times when I might get sleepless nights because I am worried. Particularly in Shaheen's case, I was worried because at this young age, she went through so much."

"As a mother, that time I had to be strong, and take the right action to help her, to heal her. I did what a mother is supposed to do."

"Of two sisters one is always the watcher, one the dancer." - Louise Gluck There are no prizes for guessing who is who in the above equation. @aliaabhatt, watching you dance (ugh, this is what happens when you write yourself into corners with quotes) your way through life has been one of my greatest joys. You surprise me everyday and I'm so proud of the kind, loving and generous person you have grown into. You are my best friend and I love you more than you will ever know. Happy Birthday, Bob.

Soni is a versatile talent who, at 60, is getting to showcase her range with films like Raazi, No Fathers In Kashmir and Yours Truly.

In Yours Truly, which has released on OTT platform ZEE5, she plays the lead role. It also features Aahana Kumra, Pankaj Tripathi and her husband filmmaker Mahesh Bhatt in a special role.

The story of the film revolves around a middle-aged woman. It is based on a short story by Annie Zaidi.

Asked about her opinion on how the audience is becoming more receptive towards such stories, Soni said: "When I was approached for the film, I asked the filmmaker, 'Who would be interested to watch a story of a middle-aged woman? I would love to be part of the story because it is the central character that nobody has offered me ever in my acting career, but who would be remotely interested to watch the story?'"

"That's when I got impressed by what Sanjoy Nag said... That every story has its audience and unless we make it and put it out there, the audience won't get access to the story. I think it is weird how people take the term middle-age.

"Everyone is middle-aged only. Because either you are newborn, a child, an adult and then a considerable time of your life, you are middle-aged. So it is then only wise to look at it as a normal age group and a story cannot be categorized as a 'middle-aged people's story'," explained the actress, who has appeared in films like <>Mandi, Saaransh, Page 3 and Patiala House in the past.

Since she has played her age on-screen, Soni said it was easier to relate to the central character of the film.

"She is a loner but what was heartbreaking for me about Mithi is that she never got a chance to choose her life partner. We all are familiar with loneliness, even if you are young. When youngsters shift their base from their hometown to a new city, for study or work, even though they have friends around, somewhere you are bound to face loneliness.

"With time, you learn how to deal with it. You have to become friends with yourself first," she said.

The story of Yours Truly is set in Kolkata, a city Soni loves for its tremendous sense of history.

"It makes the city unique and hold a charm. In old Kolkata, there are some beautiful old buildings...some of them are well-maintained, somewhere reflects what the city has gone through in the past... Kolkata does not look like a Delhi or Mumbai. The city has its identity."

"And yes, you get all the mouthwatering food in Kolkata. Being a foodie like me, what else do I want?"

(Except for the headline, this story has not been edited by NDTV staff and is published from a syndicated feed.)
Comments
alia bhatshaheen bhatt soni razdan