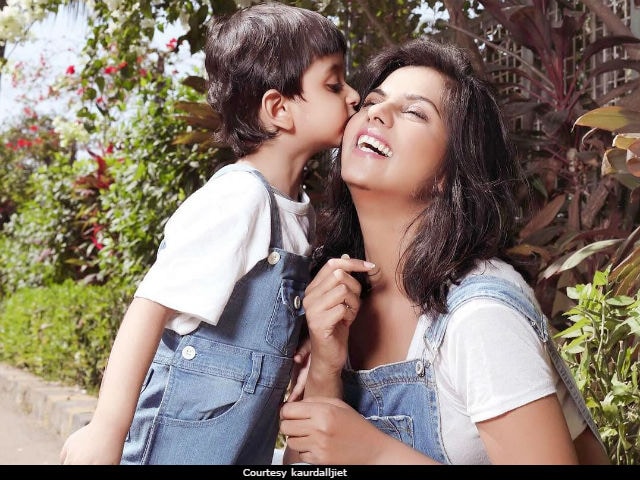 New Delhi: Television actress Dalljiet Kaur has shared wonderful pictures from her recent photoshoot with four-year-old son Jaydon, which are perfect remedies for your mid-week blues. Dalljiet accompanied each of the picture with heart-warming captions. In a picture where the mother-don duo feature in a playful mood, Dalljiet wrote: "I love you for all that you are. All that you have been. And all that to you are yet to be," while she captioned another one: "No one else will ever know the strength of my love for you, Jaydon. Because, only you know what my heart sounds like from the inside." Kaisa Ye Pyar Hai actress Dalljiet Kaur is divorced from actor Shaleen Bhanot and currently features in the popular TV show Kaala Teeka.

After her divorce with Shaleen, Dalljiet told Times Of India in an interview: "My only priority is my son and his happiness." And now, one of her heart-touching captions on Instagram reads: "Someday when the pages in my life end. I know, you will be the most beautiful chapters in it."

Dalljiet and Jaydon are meticulously coordinated in the photoshoot pictures, for which they opted for black and white suits and also the classic combination of denim and white. Jaydon clearly steals the show with his adorable antics.

Noone else will ever know the stregth of my love for u Jaydon..... Because, Only you know what my heart sounds like from the inside

Sometimes when i need a miracle, i look into my sons eyes, and i know i have already created one !!!!

Dalljiet also featured in several frame-worthy pictures minus her son. Dalljiet has lost 25 kilos and hopes that she is cast as younger characters.

it takes having no idea where you are for you to know where you want to go.

Beauty is power; a smile is its sword

Promoted
Listen to the latest songs, only on JioSaavn.com
Dalljiet married Shaleen Bhanot in 2009 and filed for divorce alleging abuse. Later, they mutually divorced last year but Dalljiet mentioned that Shaleen will meet their son according to convenience. In her interview with Times Of India, she said: "Shaleen wants to co-exist in a happier way. He wants to be a good father to my son and I won't deny him that right. I won't let my ego and resentment get in the way of providing a better world to my son. Shaleen will visit our son at mutual convenience since we will be busy with our respective shoots. And I will make honest attempts to make them meet." Shaleen and Dalljiet have been part of reality shows like Nach Baliye 4 and Nachle Ve Season 3 as a couple.