On a picture of Ananya, shared by Chunky Pandey's wife Bhavana, Farah Khan had commented that she was 'too lovely' to be related to the actor 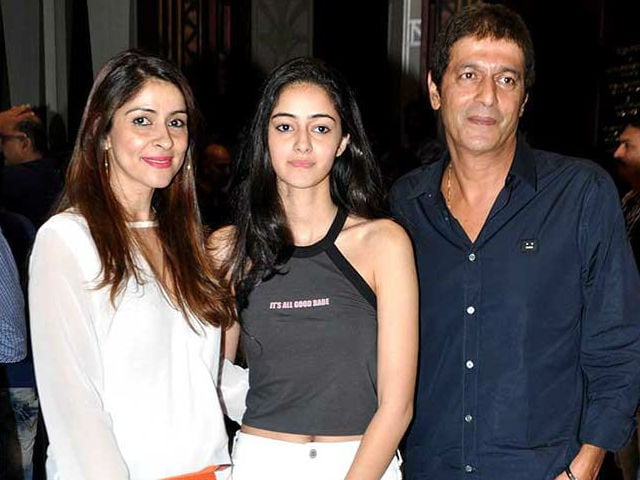 Chunky Pandey with Ananya and Bhavana in Mumbai

New Delhi: A few weeks ago, actor Chunky Pandey's daughter Ananya, 18, became one of the top trends on the Internet, courtesy choreographer-director Farah Khan. Chunky's wife Bhavana had shared a picture of Ananya on Instagram and in the comment, Farah Khan wrote that she was 'too lovely' to be related to Chunky Pandey. "Do a DNA test please. She's too lovely to be Chunky's daughter," wrote Farah Khan. Her comments made some people laugh but, she was mostly trolled. However, Chunky Pandey laughs over Farah's comment and told Hindustan Times, "Farah is a darling friend and I know what she meant. She actually called Ananya beautiful. So I take that as a compliment," adding that he, Farah and Sajid Khan have a dark sense of humour and they often crack such jokes about each other.

This was the picture which Bhavana shared.

Meanwhile, Ananya is all set make her high society debut at the very exclusive Le Bal Des Debutantes, an international fashion event in Paris for people from influential, rich families across the globe. Of the attention Ananya is getting, Chunky, 54, told Hindustan Times, "It feels great that everyone is talking about her and that too good things."

Promoted
Listen to the latest songs, only on JioSaavn.com
Ananya also showed up with Shah Rukh Khan's daughter Suhana, cousin Ahaan and Sanjay and Maheep Kapoor's daughter Shanaya at the Lakme Fashion Week, which concluded recently in Mumbai.

Chunkey Pandey and Bhavana married in 1998. They are parents to daughters Ananya and Rysa, 12. Chunky Pandey recently featured in films like Housefull series and Begum Jaan. Prabhas' Saaho is his forthcoming film.