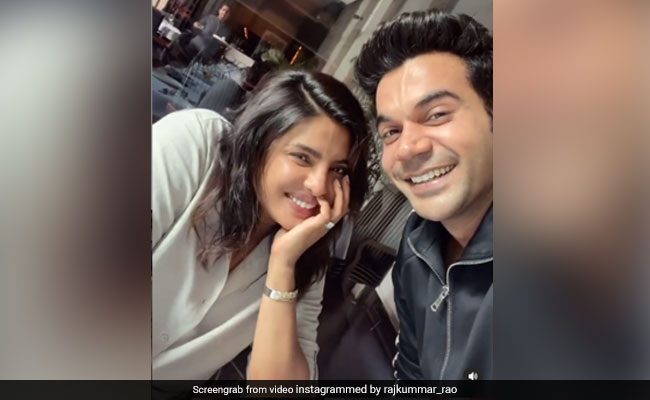 Priyanka and Rajkummar in a still from the video. (courtesy rajkummar_rao)

The White Tiger might have shades of grey in its plot but behind the scenes, it was a different picture altogether. Rajkummar Rao, in his latest Instagram entry, shared a BTS video from the sets of the film along with his co-star Priyanka Chopra. In the ROFL Video, Rajkummar Rao and Priyanka Chopra can be seen having an interesting conversation. In the video, Rajkummar asked Priyanka Chopra, "Which Hajmola do you like the most?" To which she replied, "Albela Aam and Chulbuli Imli," and burst into laughter. Rajkummar later asked her, "And do you like paan? " The Quantico actress jokingly replied, "I like Paan Pasand more than paan."

Seems like the video wasn't the only funny thing about Rajkummar Rao's post. The actor added a hilarious caption, which read, "BTS When Chulbuli Pinki and Albela Ashok went out to dinner. #TheWhiteTiger." Pinki and Ashok are the respective names of Priyanka Chopra and Rajkummar Rao's characters in The White Tiger - their first film together. Check out the video here:

The White Tiger has been directed by filmmaker Ramin Bahrani, who is best known for helming films like 99 Homes and Man Push Cart. Priyanka Chopra is the executive producer of the film. The White Tiger also stars Adarsh Gourav, who plays the protagonist. The film is based on Aravind Adiga's Man Booker Prize-winning novel The White Tiger. It showcases the rags to riches story of Balram Halwai (played by Adarsh Gourav), centered around a murder, love and deceit. The White Tiger is set to premiere on Netflix globally on January 22.

"The Girl In Pain": Don't Caption This Pic Because Parineeti Chopra Already Did