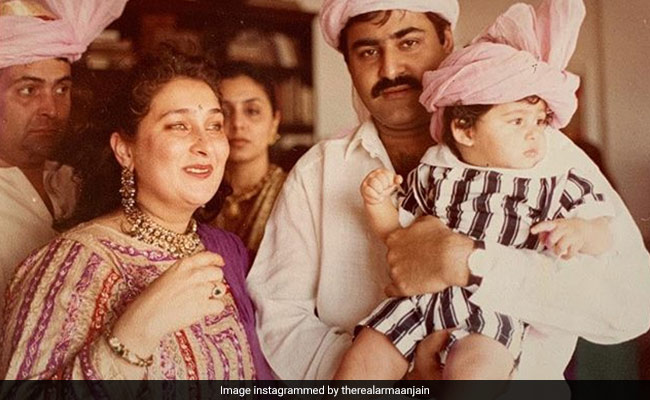 Celebrity throwback photos are always a delight and thanks to Ranbir Kapoor's cousin Armaan Jain that we got hold of one on Wednesday. Unless you read the caption, it is difficult to identify the toddler in the photo as Armaan Jain but like he said: "Throwback to only a 'few' years back." LOL. In one of the photos, baby Armaan is safely plonked in his father's arms with a safa on his head while his mother Rima Jain joins the father-son duo in the frame. Also spotted were much younger versions of Rishi and Neetu Kapoor, who got married in 1981. Armaan Jain, son of Rima Jain (Rishi Kapoor's sister and Manoj Jain) was born in 1990.

While Ranbir Kapoor is not on social media, Rishi Kapoor's outspokenness on Twitter and Neetu Kapoor's ROFL Instagram posts make up for his absence. However, Twitter has been missing Rishi Kapoor since September 2018, when he announced he's heading to the US for treatment, which is recently revealed to be for cancer. Rishi Kapoor is now cancer free and is expected to return home soon.

#throwback to only a 'few' years back

Rishi Kapoor and Neetu Kapoor Khel Khel Mein, Zehreela Insaan, Kabhie Kabhie and more recently in films such as Besharam and Do Dooni Char. They are also parents to Ridhima Kapoor Sahni, who is a jewellery designer.