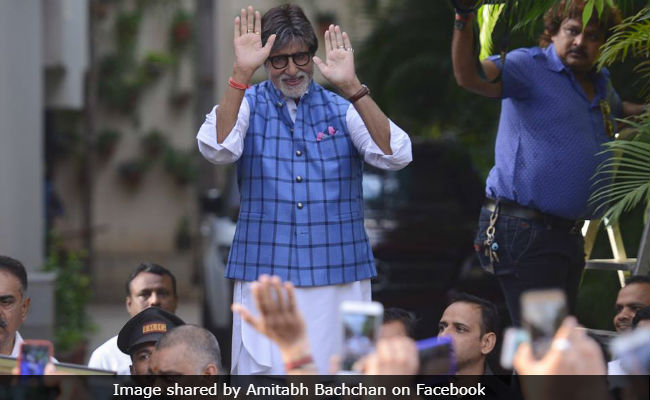 New Delhi: In his blog post on Monday, Amitabh Bachchan explained how cinema has evolved in the recent days and in the same post the 75-year-old actor made a case against the prosthetics used to enhance a character's look in the film. Describing the prosthetic make-up trials as a "torture," Mr Bachchan wrote: "Tomorrow is a torture. Prosthetic make-up for two film looks and trials. That sticky beard that extra beard that head locks and the lot. I thought I had had a lifetime of it but no, there is always more to come." In the upcoming days, Big B will be shuttling between Bulgaria and Scotland for Ayan Mukerji's Brahmastra and Sujoy Ghosh's untitled film, respectively. He may call it torture, but Mr Bachchan will be seen sporting prosthetic make-up in both the films.

Meanwhile, talking about films and the audience, Big B wrote: "The makings and the idea of story-telling are so impressive these days that never before, has there been an acceptance to the variety of films being made today." He said that the film industry is currently experiencing one of the "best times" and added: "They are small and large, budgeted, fantasy and real and they all have a value at the box office." He even mentioned that the audience has "developed a tremendous taste" and doesn't shy away from voicing its opinion.

Promoted
Listen to the latest songs, only on JioSaavn.com
Talking about the current scenario of films being made in India, Mr Bachchan added, "Competition is strong, makings are tedious and the creative ideas are the very best. A moment of pride in our little world- a world that has always been the horse to be whipped but we are a strong world and we shall continue to survive and fight."

Other than Brahmastra and Sujoy Ghosh's film, Amitabh Bachchan will also be seen in Thugs Of Hindostan, co-starring Aamir Khan, Katrina Kaif and Sana Fatima Shaikh. He was last seen in Umesh Shukla's 102 Not Out, featuring Rishi Kapoor.