"This birthday was the best birthday of all. Thanks for all the kind messages," wrote Ryan Reynolds 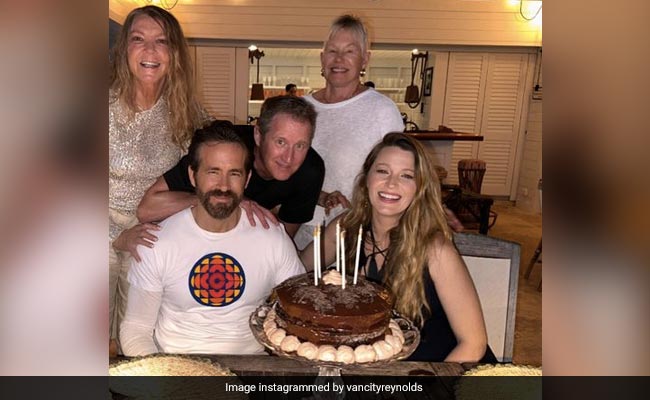 Ryan Reynolds has treated his Insta family to amazing pictures from his 46th birthday celebrations. The Deadpool star, who turned a year older on October 23, offered his fans a glimpse of celebrations with his family, including wife Blake Lively, mother Tammy Reynolds and brother Terry. In the images, Ryan looks charming. However, what grabbed our attention was the family photo in which mom-to-be Blake looks beautiful as she happily poses for the camera in an all-black ensemble. Sharing the pictures, Ryan captioned it as "This birthday was the best birthday of all. Thanks for all the kind messages."

Ryan Reynolds and Blake Lively are expecting their fourth child. The couple has three daughters, James, Inez and Betty. In September, the actress shared candid pictures of her baby bump while calling out the paparazzi. She wrote, "Here are photos of me pregnant in real life so the 11 guys waiting outside my home for a sighting will leave me alone. You freak me and my kids out. Thanks to everyone else for all the love and respect and for continuing to unfollow accounts and publications who share photos of children. You have all the power against them. And thank you to the media who have a "No Kids Policy". You all make all the difference. Much love!"

Meanwhile, on the work front, Ryan Reynolds was last seen in The Adam Project. Next, he will be seen in the Christmas-themed musical comedy film Spirited. The movie is slated to release on November 11 this year.