To secure maximum food items in their bucket, the contestants tried their best to perform the task without using their hands 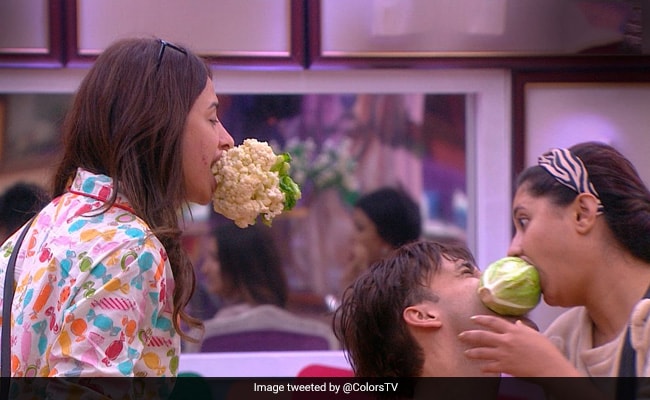 On the first day of Bigg Boss 13, the housemates woke up after hearing the loud snoring of Sidhharth Dey. Later in the day, they all complained about Asim Riaz's habit of speaking only English in the house, after which Koena Mitra sympathized with him and told him that the other contestants were only teasing him. During lunch, maalkin Ameesha Patel entered the house and Bigg Boss welcomed her by playing her famous track Kaho Naa Pyaar Hai. Ameesha announced that every week, a female contestant will be chosen as the 'Queen of the Bathroom' and will be given certain privileges. She later informed the housemates about the game that they had to play to get ration. She told them the rules, according to which the contestants had to make a line and pass on the packets of rations till the end of the row.

But, but, but, here's a twist. Only the first and last contestant could hold the vegetables and food packets with their hands. The others had to pass the packets using their mouths. To secure maximum food items in their bucket, the contestants tried their best to perform the task without using their hands.

During a chit-chat with Aarti Singh, Paras Chhabbra called Asim Riaz "jhandu" and said that the model irritates him a lot. He also revealed that he got involved in an argument with Asim during the premiere in the display room. Later, Paras and Sidhharth Dey got upset with Asim Riaz for using his state's name in every conversation. Shefali and Shehnaaz defended Asim.

At mid-night, Ameesha Patel again made a grand entry in the house dancing to track Lazy Lamhe. She introduced a task called 'Maalkin Chahti Hai,' where the male contestants had to mainly perform all other challenges. For poor performance, Paras and Asim got 'black hearts' from Ameesha. Their tasks for getting 'black hearts''ill be announced later by Bigg Boss.

It will be interesting to see how the contestants will form their personal groups in the house.