Bigg Boss 11, November 20: Who Will Be Safe In This Week's Nominations - Hina Or Arshi Khan?

Bigg Boss 11: The housemates will perform 'Feel The Fizz Task' in tonight's episode 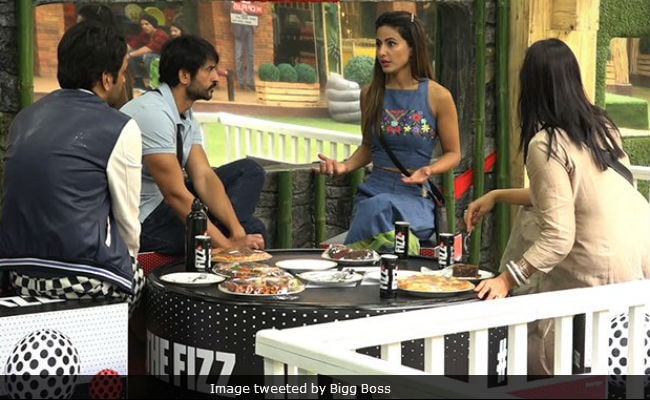 New Delhi: In Bigg Boss' last episode Benafsha Soonawalla left the house by receiving the least number of votes. In today's episode, we'll see that the gharwale will receive a 'Feel The Fizz Task' for this week's nominations. In the garden area, an appy fizz safe zone will be created. Bigg Boss' official Twitter page reveals that this 'safe zone' is extremely important and crucial for all the inmates to survive in this week's nominations. The details of the task: The contestant, who will achieve the appy's safe zone membership, will feel the fizz and will be safe from this week's nominations. Four housemates will receive the membership of the safe zone, which means that they can enjoy the luxuries provided in the safe zone.

Also, at the beginning of the task, Hina Khan, Vikas Gupta, Hiten Tejwani and Arshi Khan will receive the membership of the safe zone. All the other housemates will still be in for the nominations. As soon as Bigg Boss will play the appy fizz tune, one of the safe zone contestants would have to sacrifice the place and allow any other unsafe member to be in the safe zone. At the end of the task, the four gharwale, who will remain in the appy fizz safe zone, will win the task and will be safe along with captain Bandgi Kalra.

The #BB11 housemates to get '@iamappyfizz Feel the Fizz Task' for nominations! Tune in tonight at 10:30 PM to find out more. #BBSneakPeekpic.twitter.com/fE3DeMAiQU

In today's episode, Shilpa Shinde and Sapna Choudhary will indulge in a verbal spat, where Sapna will accuse Shilpa of calling her 'low class.'

Promoted
Listen to the latest songs, only on JioSaavn.com
Nominations ki prakriya will create misunderstandings between Vikas - Hina and Hina - Arshi (which is nothing new). Benafsha Soonawalla was the last evicted contestant of the house. Who do you think will be safe this week?

Keep reading this space for more updates on Bigg Boss 11.