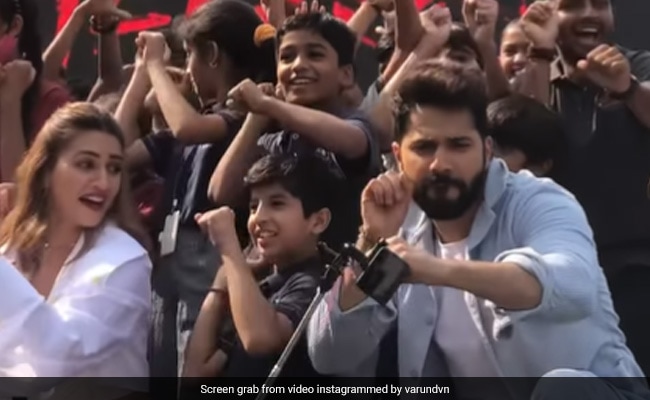 Kriti and Varun in a still from the video. (courtesy: varundvn)

Varun Dhawan is a darling of the masses and his latest Instagram post gives you a glimpse of this. The actor, who is popular across age groups, is busy with the promotions of his film Bhediya. Varun recently interacted with a large group of children at an event in Ahmedabad. In the video, Varun is seen sharing the story of his character in Bhediya and how the character transforms into a werewolf upon being bitten. In the clip, an extremely animated Varun is telling children how the bite made his character respond to sound and smell differently. At one point, the actor is mimicking the movements of a werewolf much to the amusement of Kriti Sanon and to resounding cheers from the children.

A day ago, Varun Dhawan shared a still in his Bhediya look and wrote, “They call MR WOLF, kids.”

Upon wrapping the shoot of the film several months ago, Varun Dhawan shared a photo of himself, flaunting his abs. In a note accompanying the image, he wrote, “Last day. Filming our last key scenes on #Bhediya in the next 24 hrs. Since we are not allowed to put out any stills from the film this was the last time I starred in the mirror and kinda had to say it's time to say goodbye to my long hair, beard and the changes my director Amar Kaushik has made me make for this character. Although something tells me this is not the end but a new beginning.”

Bhediya will release in theatres on November 25. The film also stars Abhishek Banerjee and Deepak Dobriyal in important roles.