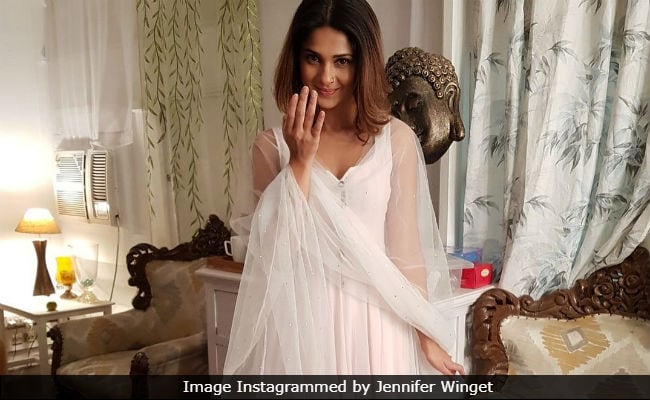 Jennifer Winget on the sets of Bepannah. (Image courtesy: Instagram)

New Delhi: Jennifer Winget, who has starred in popular shows such as Saraswatichandra and Beyhadh to name a few, in a recent interview with Times Of India spoke about how she "feels blessed" and believes that being a "social figure" has given her the opportunity to present an example in front of people. The 32-year-old actress said: "I feel very blessed that my work has allowed me to influence people in some way. Whether it is my voice or my work, somewhere it has found connect with viewers. That feels really overwhelming and you feel assured that you are headed in the right direction."

The actress who is currently seen as Zoya inBepannah, also spoke about being titled 2018's Most Desirable Woman on Television, in a poll conducted by a leading daily. She expressed her happiness on being given the title and said: "This is really awesome. I am extremely humbled; I feel honoured and am definitely blushing."

Promoted
Listen to the latest songs, only on JioSaavn.com
Earlier this month, Jennifer won the Internet with her "Cannes moment" post, wherein she was wearing a red dress. The actress, who was apparently shooting at a village named Kanjurmarg, wrote "Not walking the red carpet in Cannes doesn't stop me from having my own little Cannes moment in cann-jurmarg."

Not walking the red carpet in Cannes doesn't stop me from having my own little Cannes moment in cann-jurmarg !

Jennifer Winget began her career as a child artist in movies and has been a part of television's most popular shows such as Dill Mill Gaye, Kasautii Zindagii Kay among others. She made her debut with the 2001 television show Kkusum.