With a bright blue mask, Parineeti is seen in a casual look in the photo 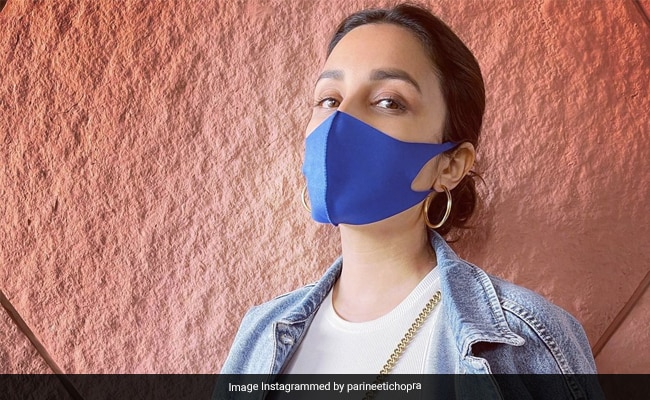 Listen up, folks. Parineeti Chopra has a message for you. The actress shared a pretty picture of herself on Instagram and reminded us to always wear a mask. She wrote, "Match it with your outfit if you like, but Wear that mask!" With a bright blue mask, Parineeti is seen in a casual look in the photo. The actress is wearing a white crop top with black trousers. To complement her OOTD, she picked a denim jacket, a cross-body sling bag and her hair gathered in a bun. Parineeti kept the accessories to the minimum with just some gold hoops.

Given the rising number of COVID-19 cases in the country, fans appreciated Parineeti's attempt to spread awareness. Followers used words like "fabulous" and "fantastic" to describe the photo and caption. The actress also shared a version of the snap on her Instagram Stories and reiterated, "Wear that mask."

Parineeti has had a busy year so far with three back-to-back releases in the last two months. The actress started with Netflix's The Girl On The Train and followed it up with Sandeep Aur Pinky Faraar. Her latest release is the Saina Nehwal biopic, titled Saina.

In a recent post, the actress mentioned that she was grateful for a good start to 2021. Sharing a picture of herself, she wrote, "And now...onward and upward!"

Parineeti also shared a video thanking fans for the response to her last three releases. She is seen smiling and blowing kisses at the camera. Reacting to the clip, one user wrote, "You're finally getting the recognition that you deserve!"

Parineeti will be seen next inAnimalopposite Ranbir Kapoor. The film is being directed by Sandeep Reddy Vanga. It will also feature Anil Kapoor and Bobby Deol in pivotal roles.

Parineeti made her debut in a supporting role in the 2011 film Ladies vs. Ricky Bahl. Her first lead role came in 2012 in Ishaqzaade.