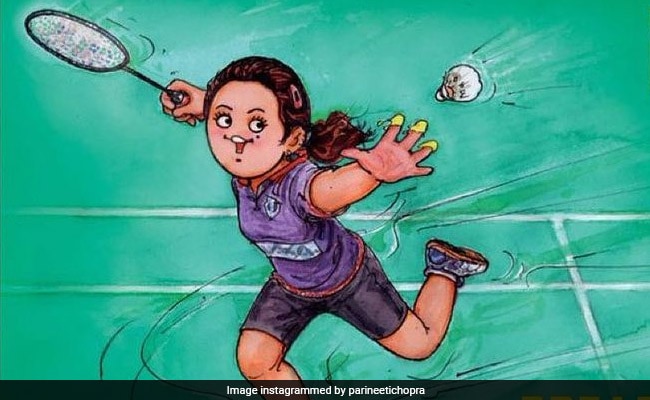 Parineeti Chopra couldn't be more excited. The actress shared Amul's latest topical, which is based on her recently released film Saina, in which she showcases the life of stellar Badminton player Saina Nehwal. The post by Amul features a cartoon version of Parineeti Chopra, dressed as Saina Nehwal. The text on the post read: "Khaya na Nehwal?" and the subtext read, "Bread pe maar dungi." Sharing the post, the dairy band wrote in its caption: "Biopic on India's badminton superstar." An excited Parineeti shared the post on her Instagram profile and she wrote: "Heart is so full! Thank you Amul India. Your stamp of approval means everything."

Saina brings to screen the life of stellar Badminton player Saina Nehwal. The film, which has been backed by T-Series, released in cinemas on March 26. In 2019, Shraddha Kapoor was signed to play the lead role in the biopic. She had even started shooting for the film. However, the actress quit the project midway as she had several other projects in the line-up.

The film released on Friday and it opened to mixed reviews from film critics. In his review for NDTV, film critic Saibal Chatterjee gave it a 2 star rating and he wrote: "Parineeti Chopra gives it her best shot, Manav Kaul lifts provides the film a fillip when he is on the screen and the badminton action is staged with aplomb. But, despite the pluses, Amole Gupte's Saina is a mishit."