Saina Review: Parineeti Chopra Gives It Her Best Shot But Amole Gupte's Film Is A Mishit

Saina Review: Parineeti Chopra is not bad at all. She is, however, let down by the tonal patchiness of the film. 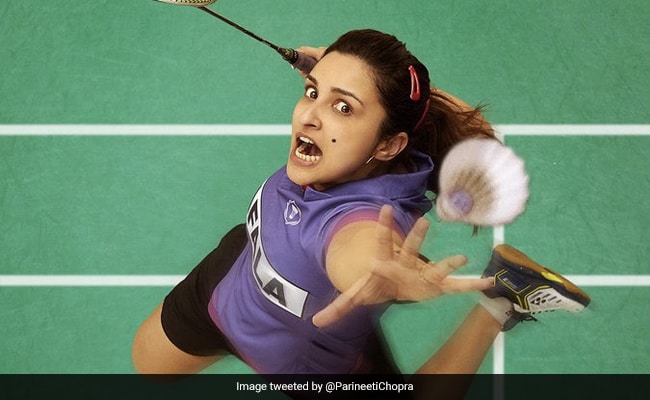 The eventful life and times of Indian badminton ace Saina Nehwal abounds in intrinsic drama no doubt. Amole Gupte's Saina, which brings her exciting story to the big screen, suffers from a lack of consistency. The sports biopic floats like a wobbly shuttlecock between trying to get the big smashes in and opting for a defensive strategy aimed at eking out a hard-fought win. That it falls between two stools isn't the principal problem; the ungainly thud with which it does so is.

Saina, written by Gupte himself, starts off in the manner of a conventional Bollywood sports drama with all the noise that goes with it. It seeks to score facile points by asserting what we already know: that Saina Nehwal's career and achievements are a breakthrough for all Indian women who want to escape the trap of domesticity.

Halfway through, the film perceptibly changes gears and looks to dig deeper into the psyche of a champion and the hurdles that she must surmount to get ahead in her chosen sport. A part of the latter strategy, which hinges on Saina's fruitful but choppy relationship with her coach, comes off smoothly and yields drama that isn't wholly unconvincing.

The unsubtle characterisation of the mother as a slavedriver - she is the key fever in Saina's formative years - pushes the film towards overt, frequently cringeworthy, melodrama. Mercifully, the tiger-mom shrillness does not last beyond a point.

Parineeti Chopra, in the guise of the real-life protagonist who sacrifices her childhood in pursuit of a dream, is not bad at all. She is, however, let down by the tonal patchiness of the film. Parts of Saina are pure Bollywood - a lot of theatricality and bluster. However, the film in its totality does have moments that are salvaged by a tilt towards psychological realism and an authentic depiction of the sport that Saina Nehwal has enriched with her exploits.

Especially effective are the skilfully mounted badminton sequences. Just as well because these scenes are strung together from beginning to end and form the crux of the film. Cinematographer Piyush Shah, with the angles and the perspectives that he creates, and editor Deepa Bhatia, with the pace she imparts to the sporting action, are able create authenticity, a believable rhythm and infectious excitement as the on-court duels unfold.

The film opens in the year 2018. Saina wins two gold medals at the Commonwealth Games in Gold Coast, Australia. It represents a major comeback for the one-time World No. 1 who is now regarded as the underdog. On her return home, she addresses a roomful of cheering journos.

The sight of reporters breaking into shouts of "Saina! Saina!" does not ring true at all. One scribe asks the shuttler who she owes her success to. On cue, the film goes into flashback mode - that is where it stays until the very end. The first-person account is both hackneyed and wobbly as the heroine takes the media - and the audience in the theatre - through the highs and lows of her career, beginning with a state-level champion where she, at age eight, wins four titles - singles and doubles in both the under-10 and under-13 categories.

Her mother, Usha Rani Nehwal (Meghna Malik) gets pride of place in the early portions of the film. Saina credits her parents from Hisar who relocate to Hyderabad when her agriculture scientist-father, Harvir Singh Nehwal (Subhrajyoti Barat), is transferred, with the never-say-die spirit that underlines her game.

The film is lifted several notches by the advent of Manav Kaul in the role of a former champion who runs a Hyderabad badminton academy for promising players. The rules he lays down for his wards are both simple and unyielding - you break one rule and you are out for good, he warns his wards.

Rajan, the character that Kaul plays with customary skill, is obviously modelled on Pullela Gopichand. Apart from Saina herself, her parents and Parupalli Kashyap (played by real-life badminton player and first-time actor Eshan Naqvi), Saina's "pillar of strength" in the sport and in life, everybody else portrayed in the film receives a fictional makeover.

This includes the former national coach of India U. Vimal Kumar. In the film, he is Jeewan Kumar, the head of the Bengaluru academy that Saina shifts to after her fallout with Rajan. The role is essayed by Ankur Vikal speaking his lines with a heavy Malayali accent.

Saina's friction with Rajan - one well-written confrontation scene sees both Chopra and Kaul at their best is blamed on the brand endorsement deals that she lands as she emerges as a youth icon second only to Sachin Tendulkar in terms of nationwide appeal. The commercials that she shoots eat into her practice time. Famously opposed to sportsmen turning into ambassadors for cold drinks and hair oils, the coach does not take kindly to Sania's aberration. He speaks his mind. Saina terminates her stint at the academy.

The rupture between mentor and ward coincides with a career slump that is aggravated by a severe ankle injury that threatens to end Saina's run at the highest level of the sport.

The final quarter of the 135-minute film is devoted to the shuttler's struggle to regain her footing and claw back to the top. In the final act, Saina takes on a Spanish opponent named Carla Martinez - she is obviously Spain's Carolina Marin - in a fight for redemption. It is a climax that does a great deal to steady the ship and help Saina end on a high note.

Saina oscillates between the bland and uninspiring on one hand and the overly dramatic and gratuitously sanctimonious on the other in search of a winning formula. It is on the top of the game occasionally but is unable to hold on to the advantage long enough for it to make a significant difference to the overall contours of the film.

Parineeti Chopra gives it her best shot, Manav Kaul lifts provides the film a fillip when he is on the screen and the badminton action is staged with aplomb. But, despite the pluses, Amole Gupte's Saina is a mishit.