Priyanka Chopra will be portraying the role of the main antagonist, Victoria Leeds in Baywatch 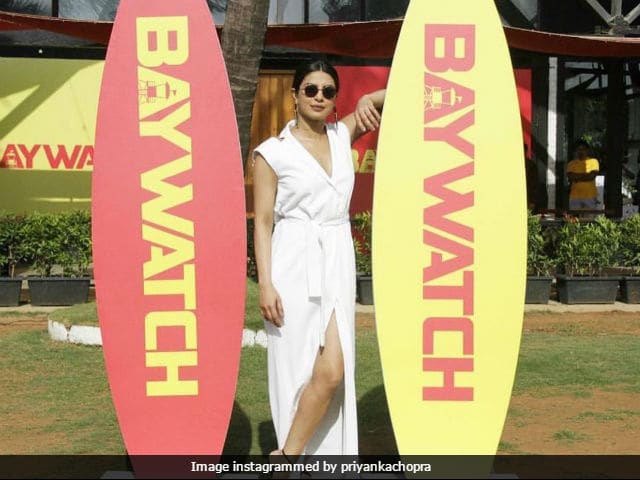 New Delhi: Actress Priyanka Chopra is busy promoting her first Hollywood film Baywatch. The 34-year-old actress will be portraying the role of the main antagonist, Victoria Leeds in the film. At the red carpet of the Miami premiere, Priyanka Chopra spoke about her character in Baywatch. The Agneepath actress said that she tried hard to be a 'jerk' on the set of the film, reported news agency IANS. Priyanka, who will be seen sharing the screen space with Dwayne 'The Rock' Johnson, Zac Efron and actress Kelly Rohrbach, also spoke about her equation with her co-stars."We got on really well, though I tried really hard to be a jerk, I couldn't because everyone was super fine," IANS quoted Priyanka as saying during the Miami premiere.

"Also, I was flying in and out as I was shooting Quantico and Baywatch together. But I did try to go a little method in my walk and in my talk. I am happy to be here. Baywatch is great summer fun. By the way, don't take your kids (to theatres)," she added.

Priyanka Chopra shared few photographs and a video from the premiere on social media. In the video shared by the Bajirao Mastani fans can be seen cheering for her. She captioned the video as: "Thank you for the love Miami! @baywatchmovie premiering on May 25th in a theater near you! #BeBaywatch (sic)."

Thank you for the love Miami! @baywatchmovie premiering on May 25th in a theater near you! #BeBaywatch

Promoted
Listen to the latest songs, only on JioSaavn.com
Baywatch, directed by Seth Gordon, is based on popular nineties television series of the same name. The film is scheduled to release on May 25 and it will hit the Indian theatres on June 2.