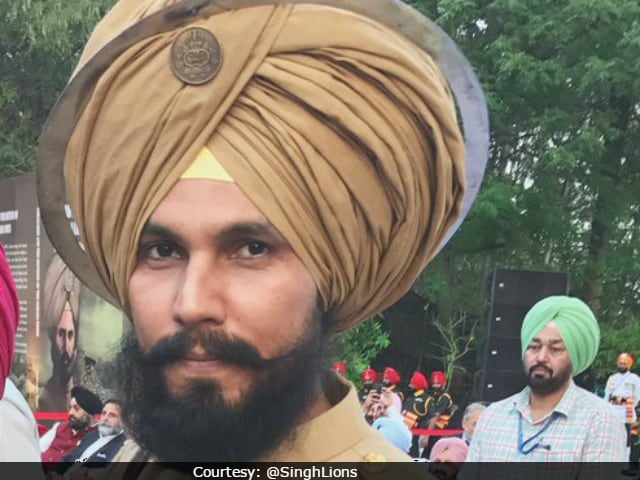 New Delhi: Actor Randeep Hooda's look for his upcoming movie Battle Of Saragarhi has been revealed. The actor attended Punjab Chief Minister, Captain Amarinder Singh's book launch, dressed as his character from the movie. Randeep wore a khaki uniform with a turban at the book launch. Entrepreneur, Harjinder S Kukreja, posted a picture of himself with the actor and wrote, "First Look of Randeep Hooda from the movie on the epic Battle of Saragarhi revealed at Captain Amarinder Singh's book launch!" Randeep, 40, re-tweeted the picture and confirmed his look from the movie. Directed by Rajkumar Santoshi, Battle Of Saragarhi is a historical war drama set against the backdrop of 1897's Battle of Saragarhi, which took place between British Indian Army (including 21 Sikhs) and Afghans. Randeep will play the role of havaldar Ishar Singh in the film.

BREAKING: First Look of @RandeepHooda from the movie on the epic Battle of Saragarhi revealed at @capt_amarinder's book launch! pic.twitter.com/7vzNVo9l3G

Randeep Hooda, who was widely acclaimed for his role in Sarbjit, also shared a still from Battle Of Saragarhi last year.

Promoted
Listen to the latest songs, only on JioSaavn.com
Randeep also told news agency PTI: "There have been lot of ups and downs. But that's a part of filmmaking. The theme of the film is 'Soora so pahchaniye, je lade deen ke het, purja-purja kat mare, kabhu na chhade khet' (Only he is brave who fights for the cause of the poor. He may be cut into pieces and may be killed, but he should not leave the field). This is the saying of Guru Gobind Singh that they do not abandon the post (battleground). Similarly, we are not abandoning the film. We are going to make it happen."