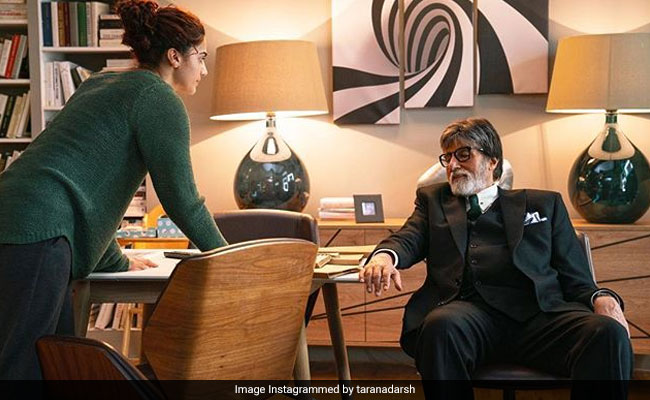 Badla box office: A still from the film (courtesy taranadarsh)

Amitabh Bachchan and Taapsee Pannu's new film - crime thriller Badla - has been given a thumbs up by cine-goers, something which has translated into impressive box office numbers. Badla has been at the theatres for three days and trade analyst Taran Adarsh tweeted to say that: "Badla is a success story." Positive reviews for the film garnered more and more footfall over the weekend, resulting in a weekend collection of over Rs 17 crore - Rs 8 crore on Saturday and 9 crore on Sunday. In three days, Badla has garnered a box office amount of Rs 23 crore in India and a total of Rs 27 crore including numbers from theatres overseas.

Here's yet another update from Taran Adarsh for last week's releases Badla and Captain Marvel:

The successful phase continues... Both, #Badla and #CaptainMarvel have scored at the BO... The *combined* weekend biz is Rs 63.91 cr... Diametrically opposite in terms of genre, the numbers prove, yet again, that two films can co-exist in a week... Even in a non-holiday week. pic.twitter.com/NlRPfaoUx7

Directed by Sujoy Ghosh, Badla marks Amitabh Bachchan's second film with Taapsee Pannu after Pink and the crime thriller opened to encouraging reviews on Friday. In his review for NDTV, film critic Saibal Chatterjee wrote: "Badla is a crime thriller that lifts itself out of the limitations of the form by spotlighting questions of guilt and retribution without diluting its edgy quality," and about the film's lead cast, added: "In a role that is right up his alley, Amitabh Bachchan is classy. Taapsee Pannu is right on the button as a cornered woman on the brink of a catastrophe, as is Amrita Singh as an aggrieved mother who has nothing to lose."