At Yami Gautam's Wedding, Sister Of The Bride Surilie Was In Her Festive Best

Pictures shared by Surilie Gautam are all things pretty 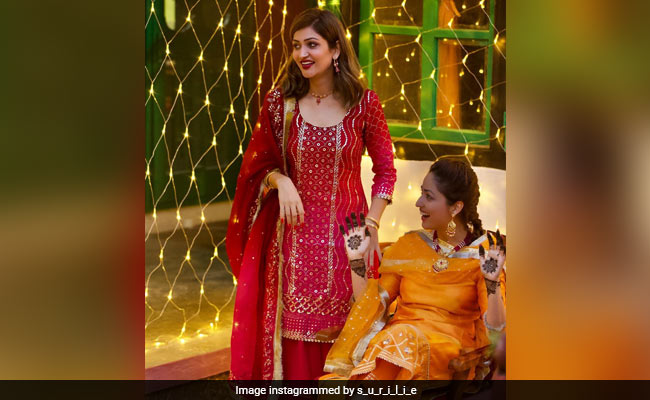 While a section of the Internet is busy crushing over Yami Gautam's "simple" bridal looks, we want to borrow your attention to also notice the sister of the bride - Surilie Gautam, who happens to be an actress just like her sister. Last week, Yami Gautam married Uri director Aditya Dhar in an intimate ceremony, pictures from which are trending big time. Surilie too shared pictures from Yami's wedding festivities on her Instagram profile. For Yami's mehndi ceremony, Surile picked a red and gold salwar kurta, which she paired with a matching dupatta. She also gave a glimpse of her henna design. Yami was pretty as ever in an orange ensemble.

For her haldi ceremony, Yami picked the obvious tone (yellow) and floral jewelry, while her sister complemented her in a set of cyan separates with some OTT jewelry. Take a closer look at Surilie's OOTD:

The actress, who got married in an intimate ceremony last week, posted picture from her wedding and she wrote: "'In your light, I learn to love - Rumi'. With the blessings of our family, we have tied the knot in an intimate wedding ceremony today. Being very private people, we celebrated this joyous occasion with our immediate family."

Yami Gautam  featured in TV serials and commercials before making her Bollywood debut with the 2012 film Vicky Donor. She has featured in films like Bala, Yuddham, Badlapur, Sanam Re, Kaabil and Ginny Weds Sunny, to name a few. Her next project is Bhoot Police.