At Sagarika Ghatge's Wedding, A Chak De! Selfie Of Rivals Preeti And Komal

Chitrashi was one of two other Chak De! India hockey players at the festivities - actress Vidya Malvade, who played the captain Vidya Sharma, is one of Sagarika Ghatge's best friends and was by her side through the many wedding functions 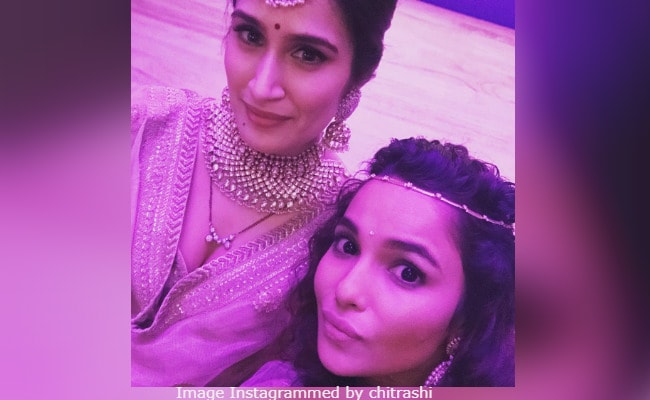 New Delhi: One was pint-sized firebrand from Haryana, rustic of speech and deadly with a hockey stick; the other was a glamorous Chandigarh lass, unused to try outs and being benched. Komal Chautala and Preeti Sabarwal were rivals on the pitch right up until the final match when Komal lets Preeti shoot, scoring a goal, as revenge against Preeti's cricketer boyfriend who dismissed her talents. 10 years after Chak De! India, Preeti Sabarwal married a real live cricketer and invited her hockey teammates. Sagarika Ghatge, Preeti for those who need to be told, and Zaheer Khan got hitched last month and their guest list included Chitrashi Rawat, who played the feisty Komal.

Chitrashi was one of two other Chak De! India hockey players at the festivities - actress Vidya Malvade, who played the captain Vidya Sharma, is one of Sagarika Ghatge's best friends and was by her side through the many wedding functions.

At the reception held in Mumbai on November 27, Komal and Preeti posed for a Chake De! selfie:

Most gorgeous bride my darling saka I still can't believe you are married. All the love and happiness to you. May u remain forever wonderful & gorgeous @sagarikaghatge #sagarikazaheerwedding #chakdeindia #sazak

They also took a group picture with Vidya and others - Sagarika and Vidya wore Sabyasachi, Chitrashi was dressed in a peach Pallavi Goyal lehenga. See all the pictures Chitrashi Rawat posted from the reception:

It was so nice to see you again last night @hardikpandya93 You are such a Rockstar !!! #sagarikazaheerwedding #hardikpandya #sazak

Promoted
Listen to the latest songs, only on JioSaavn.com
None of the other Chak De! India cast members - which includes Shah Rukh Khan as a disgraced hockey star recruited to coach the women's team - seem to have attended the wedding celebrations. After her debut, Chitrashi had a role in 2008 film Fashion, starring Priyanka Chopra and Kangana Ranaut, and has worked on and off in films such as Luck and TV shows like F.I.R.

Sagarika Ghatge and Zaheer Khan had a low-key court wedding in November but festivities stretched over a week. The wedding was followed by mehendi and sangeet ceremonies and the celebrations were rounded off with the Mumbai reception.