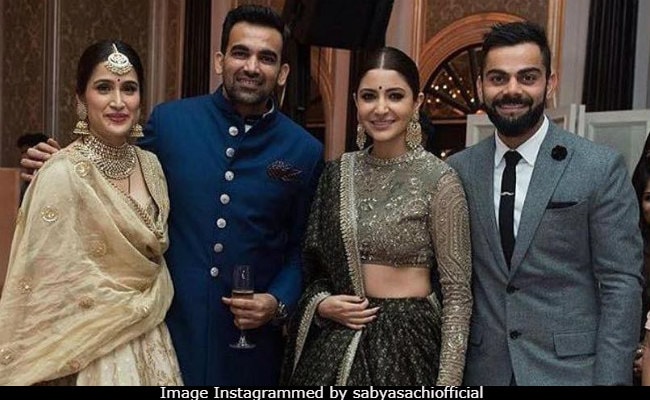 New Delhi: Actress Sagarika Ghatge and cricketer Zaheer Khan rounded off their wedding festivities with a blockbuster reception in Mumbai on Monday. The newly-wed couple got married earlier last week but continue to rule the trends chart as fresh photos from inside the reception, which had a star studded guest list, continue to be shared on social media. Special guests at the party were sabka favourite duo Anushka Sharma and Virat Kohli while others like Neha Dhupia and Ashish Chowdhury were also there. Also, there was plenty of dancing-shancing on the floor and just like Angad Bedi said - "Poora Taj Colaba hillataa!" - the guests had their party shoes on all night.

The Men In Blue at the party included names like Ashish Nehra, Suresh Raina, Mohammad Kaif and Yuvraj Singh, whose plus one was his actress wife Hazel Keech. Show host Gaurav Kapur was also there.

The boys side ... ... congratulations @sagarikaghatge n @zaheer_khan34 May ur lives always be filled with happiness like it was last night! #aboutlastnight

A post shared by HazelKeechOfficial (@hazelkeechofficial) on Nov 28, 2017 at 7:18am PST

When @yuvisofficial is taking a group selfie and @gauravkaps makes him laugh so hard all the pictures come out blurry!!!! Signs of happy times #rushmanehra #nehrasneedtogetoninstagram

A post shared by HazelKeechOfficial (@hazelkeechofficial) on Nov 28, 2017 at 6:06am PST

Leading the dance group was Neha Dhupia but it was Virat and Anushka's bhangra at the party that went viral yesterday.


While the guests had a blast at the party, Sagarika and Zaheer took some time out for a stunning photoshoot. Sagarika looked stunning in a gold and beige Sabyasachi wedding lehenga paired with jewellery from Sabyasachi Heritage Jewellery Collection. Zaheer complemented her in a traditional bandhgala.

Promoted
Listen to the latest songs, only on JioSaavn.com
Sagarika and Zaheer had a simple court marriage on November 23, which was followed by mehendi and sangeet ceremonies. Sagarika opted for a pista-coloured Anita Dongre lehenga for the mehendi and she opted for a shimmering grey ensemble designed by Falguni and Shane Peacock for the sangeet.

Congratulations once again, Sagarika Ghatge and Zaheer Khan! Wish you a great married life ahead.