'At A Wedding, Not Mine': Arjun Rampal Captions Pic With Rumoured Girlfriend Gabriella Demetriades 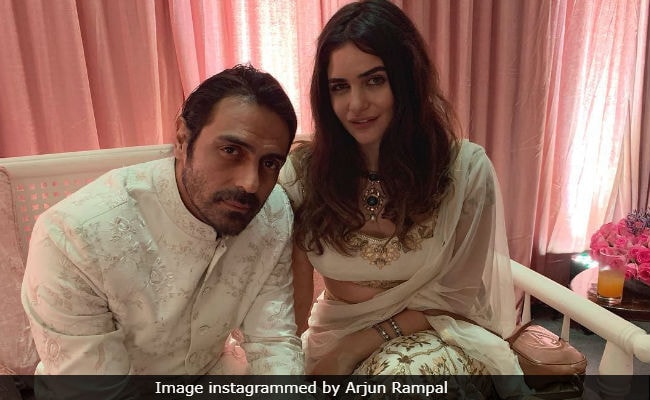 Arjun Rampal attended a wedding with rumoured girlfriend Gabriella Demetriades, which he clarified in caption was not his wedding. Both wore complementary Indian outfits by Rohit Bal. Arjun Rampal captioned the post: "At a wedding, not mine!!! Congratulations!" Arjun's Instafam was stumped by the caption and posted comments like, "'Not mine!' That was a good one!" along with several ROFL emoticons. Arjun Rampal, who was earlier married to Mehr Jessia, started dating Gabriella Demetriades few months ago. They met at an IPL party when Arjun was still married to Mehr, however, they reconnected after Arjun and Mehr's divorce.

At a wedding, not mine!!! #saifgothansy congratulations outfits by the maestro @rohitbalofficial ty brother felt good.

Arjun Rampal and Gabriella Demetriades are frequently spotted together and she usually accompanies him to Bollywood events and parties. Gabriella Demetriades has featured in two films - 2014's Sonali Cable and 2016 Telugu film Oopri. She has also appeared in a music video opposite Aditya Narayan in his single Tu Hi Pyar Hai.

Arjun and Mehr announced their separation after 20 years of marriage in May this year. Arjun and Mehr issued a joint statement, in which they said they have mutually decided to split, adding: "Relationships can end, but love lives on." They are parents to 16-year-old Mahikaa and 13-year-old Myra.

After their separation, Arjun Rampal was briefly linked to Sussanne Khan, Hrithik Roshan's ex-wife, but the actor dismissed the reports with this Instagram post:

Arjun Rampal was last seen in JP Dutta's Paltan and his next film is Nastik, directed by Shailesh Varma.