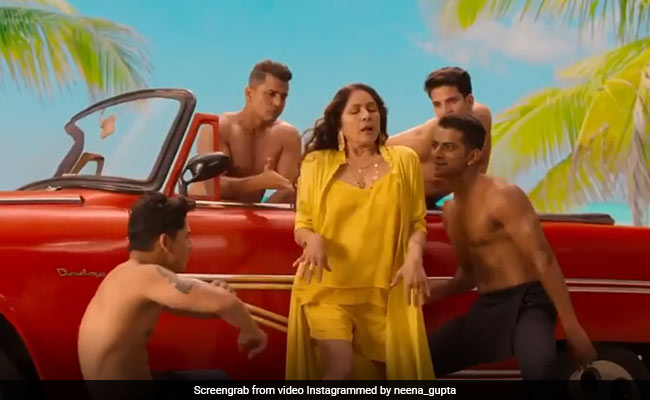 Neena Gupta in a still from the video. (courtesy: neena_gupta)

Is there anything that Neena Gupta can't do when it comes to entertainment? Well, the reason we brought this up today is because a new song from her daughter and fashion designer Masaba Gupta's upcoming web-series Masaba Masaba released on Tuesday and we are in love with it. The song titled Aunty Kisko Bola begins with Mithila Palkar saying, "Just get out of the way, aunty," which acts as a trigger. What follows is a video as vibrant as Neena Gupta's personality. From saree to sun dress, and shimmery skirts and blazers, Neena Gupta carries all the outfits with utmost ease and style while she schools Mithila Palkar for addressing her with the 'A' word, in the song.

Masaba Masaba is slated to release on August 28 on streaming giant Netflix. The semi-fictionalised show is inspired by the lives of Masaba Gupta and her actress-mother Neena Gupta. It has been directed by Sonam Nair and has been produced by Ashvini Yardi. Check out the trailer here:

Masaba Gupta, daughter of veteran actress Neena Gupta and former West Indies cricketer Vivian Richards, was last seen as one of the judges on the TV reality show MTV Supermodel Of The Year. Sonam Kapoor, film producer Rhea Kapoor and many other Bollywood stars, including Masaba's mother Neena Gupta, swear by her designs.