Arjun Rampal and Gabriella often give us couple goals 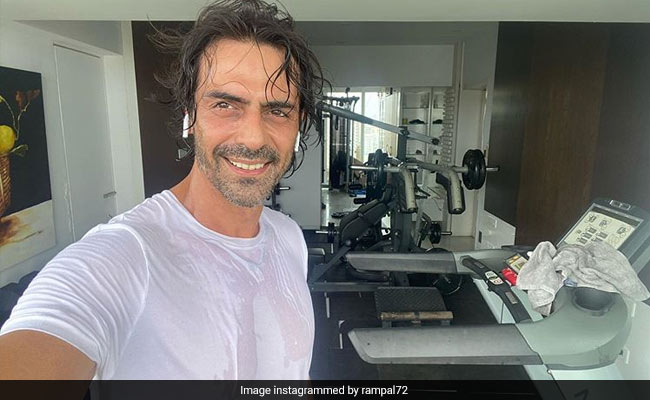 Arjun Rampal and girlfriend Gabriella Demetriades, every now and then, share glimpses of their social media PDA and the actor's latest post on Instagram is just another example of it. Arjun, on Tuesday, shared a post-workout picture of himself from his gym. In the photograph, he can be seen sporting a white t-shirt, which looks drenched in his sweat. Sharing the picture, Arjun Rampal captioned it perfectly. He wrote: "Sweat it out." Within 10 minutes of posting the picture, Gabriella Demetriades dropped a heart-eye emoji for her boyfriend's post-workout look in the comments section. First, check out the post that Arjun Rampal shared:

Arjun Rampal is currently living with Gabriella and their little son Arik in Mumbai. The actor was earlier married to renowned model Mehr Jesia, with whom he has two daughters - Mahikaa and Myra.

Arjun has been sharing a lot of pictures of his kids lately. On Raksha Bandhan, he posted a photo of his daughter tying a rakhi to him on behalf of his sister Komal. The photo also features little Arik sitting beside Arjun.

A sister is like having a best friend you can't get rid off, no matter what you do, you know they will always have your back. Missed you @kom4186 but ur nieces did the honours. Arik's second rakshabandhan. #happyrakshabandhan

Arjun Rampal was last seen in the 2019 web-series The Final Call. His last Bollywood release remains 2018's Paltan, which also featured Jackie Shroff, Sonu Sood, Harshvardhan Rane, Esha Gupta and Sonal Chauhan. He has starred in several films in his career such as Dil Hai Tumhaara, Asambhav, D-Day, Chakravyuh, Inkaar, Om Shanti Om, Rock On!, Housefull, Raajneeti and Ra.One, in which he co-starred with Shah Rukh Khan. The actor has not announced his next project yet.