"It's a wrap for me..." wrote Arjun Rampal in his caption 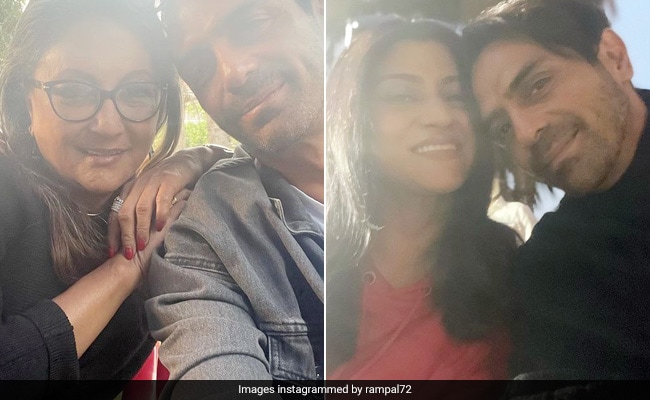 It's a wrap for Arjun Rampal on the set of his upcoming film The Rapist. The movie is directed by National Award-winning filmmaker Aparna Sen and also features her daughter and actress Konkona Sen Sharma in a key role. As Arjun finished the shoot in Delhi today, the actor has posted a few pictures with the director Aparna and his co-star Konkona from the set on Instagram. Arjun also wrote a thank-you note in his post. In the caption, the actor shared the experience of his journey on the set of The Rapist and how he felt after working with both of them.

The Om Shanti Om actor shared that as an actor his journey has been "intense and fulfilling" on the set of The Rapist. Arjun called Aparna Sen the "prettiest director" and praised her for her vision. He called his co-star Konkona, "one of the finest actors in our country" and thanked her for being "kind and effortlessly cool".

Arjun wrote, "It's a wrap for me.... #TheRapist it's been intense and so fulfilling this journey as an actor, working with the prettiest director #AparnaSen who's vision and clarity and most importantly her passion, her stamina and hard work has been so humbling and enriching. My dearest co star and one of the finest actors in our country @konkona for being so kind and so effortlessly cool. the marvellous @kamera002 for creating such beautiful images. My two young producers #SuchhandaChatterjee and #ShubhaShetty thank you thank you thank you #Rapist #Delhi #wrapped."

Arjun's girlfriend Gabriella Demetriades also reacted to his post. She posted a clapping emoji in the comment section.

Coming back to Arjun Rampal, the actor recently posted a few pictures from a set in Delhi that featured his one-year-old son Arik. He wrote, "When my little champ visits me on set. #Delhi #arik."

Apart from The Rapist, Arjun Rampal will be seen in the Kangana Ranaut's film Dhaakad. Arjun is also gearing up for two other Hindi films such as The Battle of Bhima Koregaon and Nastik along with the Telugu film Hari Hara Veera Mallu.

On the other hand, Konkona Sen Sharma will next be seen in the Netflix anthology Ajeeb Daastaans and the film Scholarship, apart from The Rapist.Konkona has previously worked with her mom Aparna Sen in the films such as Mr and Mrs Iyer and 15 Park Avenue.

Speaking of Arjun and Konkona, the actors have earlier collaborated in the film Meridian Lines in 2013.

Aparna Sen is known for her work primarily in Bengali cinema. She has worked as an actress and as a filmmaker. Aparna made her debut as an actress in the Satyajit Ray's 1961 film Teen Kanya. Apart from Mr and Mrs Iyer and 15 Park Avenue, she has also directed films such as Paroma, Sati, Yugant and Paromitar Ek Din.