"A must visit here is recommended," wrote the actor while sharing glimpses of his trip 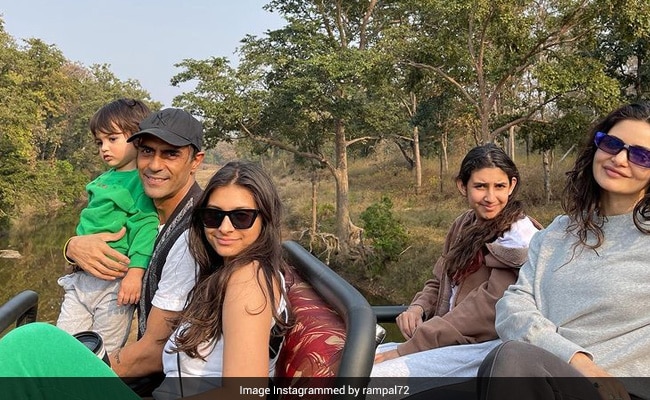 Arjun Rampal enjoyed a "mesmerising and fantastic day" at Madhya Pradesh's Satpura Tiger Reserve with his family on Tuesday. The actor, a day later, posted some amazing pictures and videos from his trip on social media, in which he can be seen posing with his girlfriend Gabriella Demetriades, son Arik and daughters Mahikaa and Myra. Sharing the vacation album, the actor wrote: "An absolutely mesmerising and fantastic day at Satpura tiger reserve yesterday, spotted a tigress, a tiger stalking gaur, three sloth bears a mother and cub and one solo. Lots of other beautiful animals. This is the oldest and largest forest reserve in India at #mptourism has done a fantastic job of relocating 47 villages around the sanctuary to create a larger more safer space for the animals. A must visit here is recommended. #mptourism #borisafarilodge #satpuratigerreserve."

Gabriella Demetriades also shared a few pictures from their trip on her Instagram profile. Check them out here:

In terms of work, Arjun Rampal was last seen in Zee5's courtroom-drama Nail Polish, which also featured Manav Kaul. He has featured in a number of films such as Paltan, Dil Hai Tumhaara, Asambhav, D-Day, Chakravyuh, Inkaar, Om Shanti Om, Rock On!, Housefull, Raajneeti and Ra.One, in which he co-starred with Shah Rukh Khan. The actor's next project is Dhaakad, also starring Kangana Ranaut.

Gabriella is a South African model and actress, who has featured in the 2014 Hindi film Sonali Cable and the 2016 Telugu movie Oopiri.