Arjun Rampal's Day Out With Daughter Mahikaa And Her Classmates 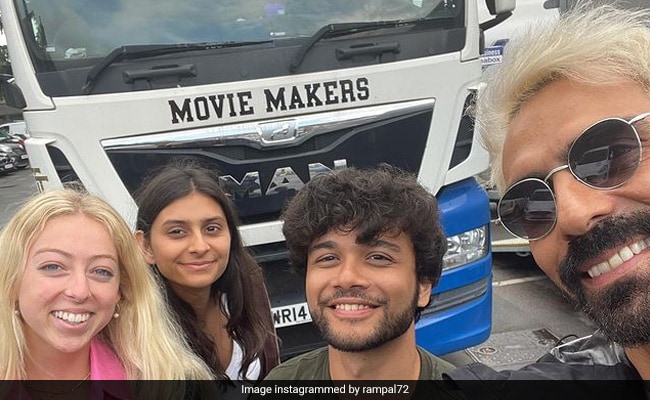 Arjun Rampal is a doting father and there is ample proof of the strong bond he shares with his children on social media. Recently, the actor spent some special time with his daughter Mahikaa in London and shared photos from the fun day. The father-daughter duo was accompanied by Arjun Rampal's youngest child, Arik, as well as Mahikaa's classmates from film school. Along with the pictures, the actor revealed that he had spent the day discussing the nuances of cinema with aspiring actors and filmmakers.

The first of the three pictures that he shared on Instagram is a selfie of the group. The other two feature Arik, Mahikaa and her friends smiling for the camera. In the caption, Arjun Rampal wrote, “Daddy's day out. Had a wonderful day with Mahikaa and some of her classmates. Had discussions with great introspection, with these young aspiring filmmakers/ actors who gave me a tour of their very special campus in Ealing. Looking forward to our Hyde park run.”

Previously, on the occasion of his son's birthday, the actor had shared a photo with Arik, to express his gratitude for all the wishes that had come their way. In the image, Arjun Rampal is seen holding Arik's hands as they cut a cake. He penned a message on behalf of Arik in the caption that read, “Thank you for all your love and wishes on my birthday. I had a blast. Arik.”

And on the special day, Arjun Rampal shared a bunch of pictures with the two-year-old that can only be described as beautiful. In the caption, the father wrote, “My darling son, you turn 2 today and we as a family are just so grateful for all the love and joy you bring. Happy 2nd birthday, Arik.”

Arjun Rampal was previously married to model Mehr Jesia. The couple announced their separation in 2018 after 20 years of marriage. They have two daughters together, Mahikaa and Myra.