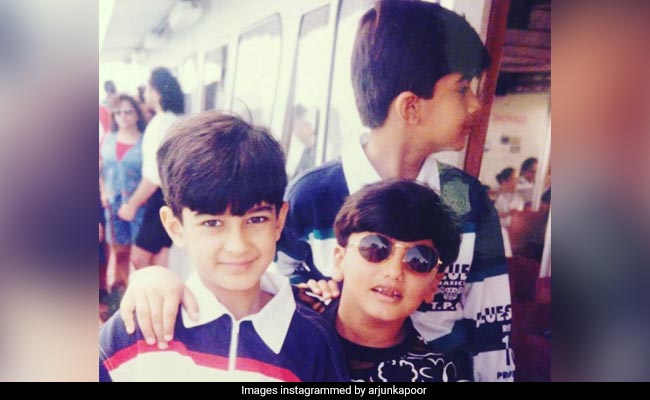 We can bet that a mere glance at Arjun Kapoor's "Tuesday throwback" post will definitely make you smile. Why, you ask? Well, to begin with, it features little Arjun along with his cousins Mohit and Akshay Marwah. Secondly, it showcases how Arjun Kapoor had a strong posing game (even as a kid). In the throwback picture, Mohit Marwah and Arjun Kapoor can be seen happily posing for the camera while Akshay Marwah shyly looks away from the camera. The picture received lots of love from Arjun's Instafam. Akshay Marwah commented: "Caption of the day" and we couldn't have agreed more.

In case you are wondering what Arjun Kapoor wrote, we are here to help. "Brothers in arms. Mohit Marwah and I pose away as usual while Akshay Marwah looks around for the next business opportunity even as a kid," wrote Arjun and he added the hashtags #tuesdaythrowback #goodtimes #fashionkahalwa #brothersday."

Brothers In Arms !!! So @mohitmarwah & I pose away as usual while @akshaymarwah22 looks around for the next business opportunity even as a kid... #tuesdaythrowback #goodtimes #fashionkahalwa #brothersday

Arjun Kapoor has a treasure trove of throwback pictures. The Ishaqzaade actor frequently posts photographs along with his sibling Anshula Kapoor and cousins - Sonam and Rhea Kapoor. Here are some of the posts:

Going by your expression & post basically we can sell your car off... thanks a lot Ansh !!! #Repost @anshulakapoorThis is still my expression when @arjunkapoor tells me I should drive hahahaha! Gotta love the 90s when we were all basically a cute messss! #90sKids #ThisIsProofThatIveNeverWantedToDrive

Arjun Kapoor was last seen in India's Most Wanted. His line-up of films includes Sandeep Aur Pinky Faraar, co-starring Parineeti Chopra. He also has Ashutosh Gowarikar's period drama Panipat in the pipeline, in which he will co-star with Kriti Sanon.

Arjun Kapoor is the son of film producer and Boney Kapoor and Mona Shourie Kapoor.